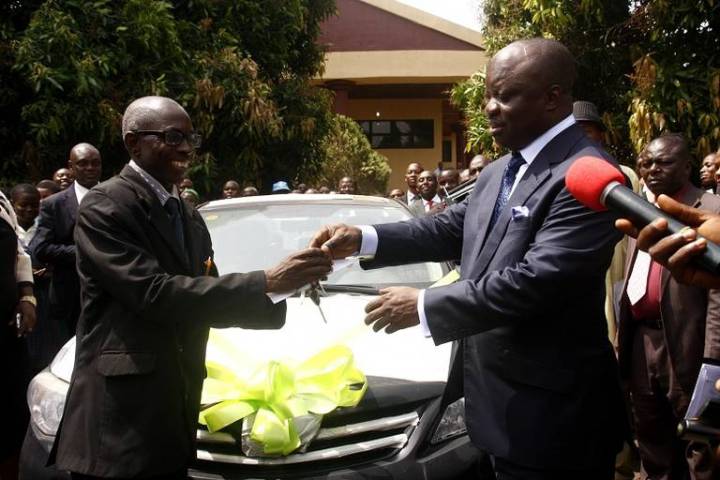 In what could only be described as an act of providence, an English Literature teacher in Asaba, Mr. Ikechukwu Akamaka, who was rewarded with a brand new car by Delta State Governor, Dr. Emmanuel Uduaghan, for his hard work at a Literary Session held last tear in the state capital, has finally received the brand new car.

Mr Akamaka teaches English Literature at the West-End Mixed Secondary School, Asaba, one of the schools that participated in the Literary programme organised by the Office of the Special Adviser to the Governor on Foreign Relations, Mr. Oma Djeba, on Thursday November 29, 2012 in Government House, Asaba to honour Prof. Ogaga Ifowodo, a literary icon and lecturer at the University of Texas, United States of America.

Prof. Ifowodo is from Isoko in Delta state.

The teacher’s reward came on the wings of the impressive performance of his students in an impromptu poetry recitation organized by Governor Uduaghan, which featured 14 students from various schools.

Governor Uduaghan had discovered in the course of the recitations, that of the 14 students, four came from West-End Mixed Secondary School, and the youngest was nine years old.

The Delta Governor had also observed that the students didn’t just recite any poem, but poems they had composed themselves, and this led to a special recognition for their literature teacher, Mr Akamaka who was promptly rewarded with a brand new car for tutoring his students well.

Uduaghan had said at that time that; “It gladdens my heart to see that literature will not die when young ones such as these come out to express themselves through poems. Taking a good look at the teacher, it is quite obvious that he has given his devotion to the job. He does not look like someone who shares his teaching time with his private business”.

The students themselves were rewarded with an i.Pad each. 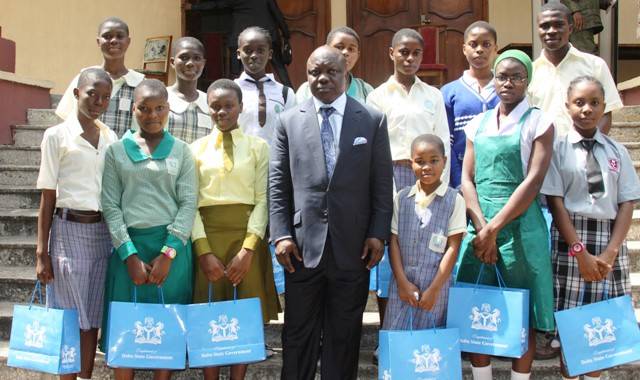 There was an interesting twist in the tale however. Mr. Akamaka had expressed his unhappiness to those who had come to pick the students to the literary event on that fateful day in November, saying that the impromptu movement had affected his classes and if he had known that his lesson period would be disrupted by the movement, he would have declined to lead the students to government house for the show.

Ironically, Akamaka had only been mandated by the Principal of the School to chaperone the students to the literary event, because the female teacher who had originally selected the students to attend the event, Mrs. Kate Ohawa could not lead them to Government House, as she had just put to bed and was nursing her new baby that eventful day.

The presentations took place in government house, Asaba on Thursday, January 31, 2013, almost two months to the day when the car gift and iPad promise was made.

A beaming Mr. Akamaka who didn’t even own a bicycle before that day and confessed that he doesn’t even know how to drive a car, was overwhelmed with his good fortune.

The students themselves could not contain their joy as they posed with the Governor of the state; a first for all of them and collected their brand new iPADs, which was also the first ever computer gadgets they had received in their entire lives.

These were indeed wonderful new year gifts for Mr. Akamaka and his students.