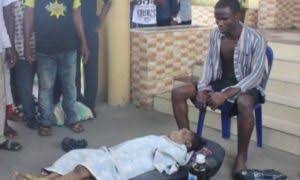 Angry youths in the Eliozu area of Port Harcourt, Rivers State, on Wednesday August 23, 2017,embarked on a volatile protest against the escape of the ritual killer suspect from police custody in Port Harcourt.

The suspect, an undergraduate of the University of Port Harcourt (UNIPORT), escaped from police custody after he was arrested for allegedly raping and killing an eight-year-old girl in the state.

The Police said they have begun a search operation to apprehend the suspect and assured the public that the search would soon produce meaningful results.

The protesters, however, barricaded a section of the road in the state capital on Tuesday, setting up bornfires with condemned tyres and singing angry songs to condemn the dastardly act and the Police.

They described the escape of the suspect as unacceptable and called on the police to produce the escapee, alleging police complicity in vociferous times during the protest which gradually grew in distemper and progressively raged uncontrollably until they were dispersed by a contingent of mobile police detachment.

The UNIPORT undergraduate, one Ifeanyi, had reportedly cut off the vital parts of the eight-year-old girl before he was apprehended by security operatives on Saturday last week.

The Police Public Relations Officer in the State, Nnamdi Omoni, had said that the suspect was on his way to dispose of the remains of the girl before he was arrested.

Omoni warned parents to monitor the movements of their children and be wary of those they allow to have access to them.

The father of the girl, who was part of the search and rescue team since his daughter disappeared on Friday, had identified the suspect as his cousin.

In the same vein the Rivers state Police Commissioner CP Zaki Ahmed described the allegations of collusion and facilitating the escape of the suspected ritualist from its custody as untrue and unfair.

The Rivers CP, in defending his Command said: “The allegations against the police is not true. The Rivers state Police did not aid the escape of the suspect. It was a case of individual negligence on the part of the investigating officer and we have duly detained him for interrogation”

Speaking futher the Rivers top cop said: “We can never do a thing like that. We have children of our own too so how can we allow someone suspected of doing such a terrible thing escape? In fact we have been parading such suspects before, kidnappers, people suspected of beheadings and others and such a thing has never happened before. This is just a case of individidual negligence by one officer and we are assuring the people that we will resolve this matter soon. They should remain calm,” he appealed.

Recall that A young man in his early twenties identified as Ifeanyi Dike has been arrested and paraded by the Rivers state police Command for allegedly raping and killing an eight year old girl in Port Harcourt.

Spokesman of the Command, DSP Nnamdi Omoni while parading the suspect at the Command Headquarters in Port Harcourt said, Dike was arrested at Eliozu in Obio-Akpo Local Government area of the state.

Omoni said Dike had allegedly raped, killed and removed vital parts of the girl’s body before he was arrested by local security in the area, adding that there was a plan by the suspect to use his victim for ritual.

According to him, “Today 19/8/2017 at about 0130hrs Men of the Okporo Police Station arrested one Ifeanyi Chukwu Maxwell Dike, 23yrs of Messiah Street Eliozu Port Harcourt, who yesterday abducted one Chikamso Victory, 8yrs of the same address.

“The little girl was abducted, defiled and killed, while her vagina, eyes, tongue and breast were removed and put in a polythene bag. The suspect was going to dispose of the body, when he was arrested by the local Vigilante that suspected his movement.

“On being questioned the suspect dropped the bag and took to flight. Consequently he was given a hot chase and arrested. On further interrogation by the Police, he confessed and took the Police to where the vital organs were concealed. The body and the organs have been recovered, paraded and deposited in the mortuary. While the suspect was detained for further interrogation and is helping us in Investigation,” the police spokesman confirmed.

However and to the shock and consternation of Rivers indigenes and the global community that had raptly followed the gory story on social media platforms, Ifeanyi Dike, who was paraded by the Rivers State Police Command for raping and killing the eight year old girl in Eliozu Axis of Port Harcourt, escaped from Police custody.

The father of the victim, Dr Earnest Mezuwuba, narrating the unbelievable tale, told the world that the suspected ritualist who is a 200 Level student of the University of Port Harcourt, escaped from the state criminal investigation department shortly after giving his confessional statement same day he was paraded by the Police with the corpse of the innocent girl.

According to him, the police officer, alleged to be a woman police, was very strict with the suspect and had him tightly in handcuffs, from the moment the Eliozu civilian vigilante handed him over to the police until even after he had been paraded. But things took a strange and different turn when the Investigating Police Officer, IPO,  refered to as a certain John Bosco, took over the matter.

Speaking further the victims father Dr. Mezuwuba said that first, Johnbosco removed the handcuffs from the suspect, so that he could write down his statement but he did not handcuff him again and the whole police station was in pitch darkness as there was no light in the premises and he even had to write his own statement with candle.

The traumatised father further said that a few minutes after he had refused to go and buy the pure water, the suspect, Dike complained that he wanted to go and ease himself and Johnbosco allegedly escorted him out and a few minutes later shouts of “e don dey escape o, hold am, catch am, e dey escape o…’ rent the air and that was how he purportedly jumped over the police fence and escaped from the police premises.

The distraught Father, who confirmed that both the suspect Ifeanyi Dike, whom he referred to as his ‘trusted btither’ and his landlord in whose house the alleged dastardly act occured were his kinsmen from his community in Imo state, and wondered why the landlord was briefly questioned and released, then urged the Police to ensure that the ritualist was rearrested to face justice and for the safety of other innocent people, even as he vowed angrily that he would do everything in his powers to ensure he gets justice.

The Rivers State Commissioner of Police, Zaki Ahmed, confirmed the disturbing incident of the escape, adding that the policemen who caused the escape had been arrested.

Ahmed called on members of the public to volunteer information that would lead to the re-arrest of the suspected ritualist.

Dike was paraded on Saturday by the Police for kidnapping, raping and killing an eight-year old girl residing in the same compound with him.

After raping and killing the girl, he allegedly cut off her private parts, removed her eyeballs, breasts and some of her fingers.

He was arrested by the local vigilante with the help of the police while attempting to dispose off the body.