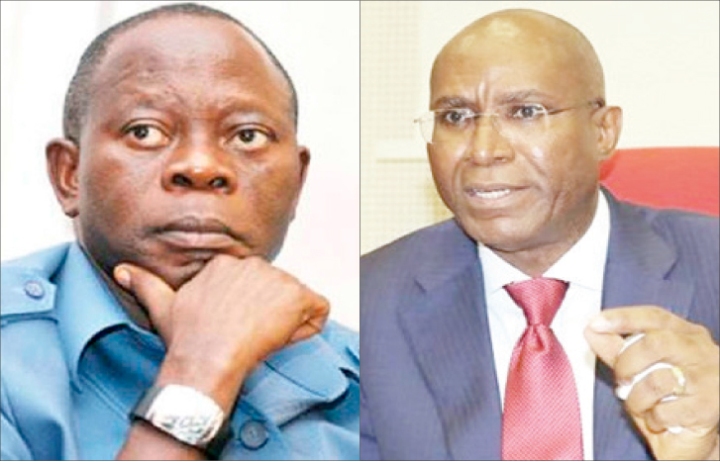 In spite of the gale of defections that is currently rattling the All Progressives Congress, APC at the national level, the fortunes of the party in Delta  state appears to be turning a corner and changing for the better, with the recent intervention of the APC National chairman, Comrade Adams Oshiomhole who successfully reconciled the warring leaders and factions that emerged after the party congresses in the state.

Comrade Adams Oshiomhole had, on Tuesday, July 24, 2018, met with the warring members of the APC in Delta state in Delta State, just days after certain persons, believed to be thugs, had barricaded the party secretariat in Asaba and prevented newly recognized chairman Prophet Jones Erue and his faction from accessing the facility to hold their meeting.

Addressing the impressive gathering of APC stalwarts in Delta state, Comrade Oshiomhole stressed that in order to ensure lasting peace and reconciliation in the party in the State, there was the need for total reconciliation to ensure victory in the forthcoming 2019 general elections, even as he added that while Prophet Jones Ode Erue, remained the state chairman, other positions in the state Exco would be harmonized to accommodate the interest of all the parties.

Comrade Oshiomhole’s directive, which was further articulated in a press statement issued by the Chief Press Secretary to the National Chairman of the APC, Simon Ebegbulem, equally urged the party leaders to embrace the Prophet Erue led leadership in moving the party forward, and while condemning what he described as unwarranted attacks on his person and those of the National Working Committee of the party, on social media, by some party members in Delta state, admonished that they should rather make comments that would reconcile the party and not those that will further inflame the crisis.

Addressing the leaders, Oshiomhole who expressed his resolve to ensure that the party wins Delta State, admonished the leaders not to allow the ambitions over-ride the general interest of the party stressing that the issue of the governorship candidate of the party must not be allowed to destroy the party in the state.

According to him, “I have said it before that I have interest in Delta state because Edo and Delta is one. And we must ensure that Delta join Edo state in APC through democratic means. And I know that we all can do it if we can reconcile our differences and confront the real enemy, which is the PDP. And whatever we are doing, I believe we should think about the interest of Delta people who have been denied of good governance by the PDP administration over the years.

“Only one person can be governor at a time and before you know it eight years is over and another person takes over. So we must not see it as a do or die affair. We must all work together make concessions and go back to work immediately because we have no time. We are going to confront an incumbent who is desperate to return but we will mobilize Delta people to stop Dr Ifeanyi Okowa” he stated.

Most of the leaders who expressed their views commended Comrade Oshiomhole for finding solution to the protracted crisis rocking the party in the state and expressed their willingness to work with the national leadership of the party to ensure victory for the party.

Prophet Erue, the recognized APC Delta Chairman, appealed for calm, promised to work with all the stakeholders and sought for cooperation from all parry faithful to enable him succeed.

The Minister of State Petroleum, Dr Ibe Kachukwu, in his vote of thanks, urged the party leaders to abide by the decision of the National leadership of the party and ensure that peace returns to Delta State. “I commend you Mr Chairman for this effort and other efforts you have been making to ensure unity in our party in states where we have crisis.

“I want to urge our party leaders to embrace peace so we can achieve victory for the party come 2019”.

The meeting which commenced at about 8pm and lasted till 11:30 Tuesday night after which all the parties exchanged pleasantries at the end of the fence mending parley, was attended by the who is who is Delta APC, including the Minister of State Petroleum, Dr Ibe Kachukwu, Chief Great Ogboru, Senator Ovie Omo-Agege, Olorogun O’tega Emerhor, Dr. Cairo Ojougbou, Rt. Hon. Victor Ochei, Chief Emami Ayiri, Olorogun Cyril Abeye Ogodo, Dr Miriam Nneamaka Ogoh Ali, Comrade Frank Kokori*and all the other big wigs and prominent leaders and statesmen and women of the party in the state.