A legal sword of imminent tragedy and foreboding is dangling perilously over the political ambitions of Senator Ovie Omo-Agege, Reverend Francis Ejiroghene Waive and all those who were victorious under the All Progressives Congress, APC platform, in the just concluded 2019 general elections, as a Federal High Court sitting in Asaba, has put the proverbial legal cat amongst the APC Pigeons, by granting judgment and recognition to the Chief Cyril Ogodo led faction of the party as the authentic Delta APC Executive Committee.
Justice T.B. Adegoke of the Federal High Court, Asaba on Monday, 18/3/2019 declared that the Chief Cyril Ogodo-led executive is the authentic executive committee of the All Progressive Congress (APC in Delta state.
Accordingly, the judge declared that the Prophet Jones Ode Erue’s executive and all the actions it purportedly took while it purportedly functioned as the APC state executive is null, void and of no effect whatsoever.
In the suit, Chief Ogodo is seeking among about 13 reliefs, a declaration that he is the authentic chairman of the APC in Delta State, and that any and every action purportedly taken, initiated or carried out by Prophet Jones Odeh Erue as chairman of APC (fourth defendant), by the second defendant (national Chairman, Adams Oshiomhole) in Delta State following his purported inauguration, swearing-in and recognition and/or appointment by the National Chairman, as chairman of APC in Delta State is/and null, void and of no effect.

Delivering the judgement, Justice T.B. Adegoke upheld all the 13 reliefs sought by Chief Cyril Ogodo in which he asked the court to declare him as the authentic chairman of the APC in Delta State. The judge in her about 2 ½ hours judgment took a painstaking review of the case, the evidences, and the submissions of the various counsels and witnesses, even as she took a swipe at the defence for not providing diligent defence, pointing out that they failed to provide evidence to support their opposition to the claims of the plaintiff, who diligently adduced evidence to back up every of his claims.

“The defendants did not produce any evidence to contradict the claims of the plaintiffs that the congress that produced the Cyril Ogodo executive committee actually held on the stipulated date. That the defendants did not tender evidence to prove that it conducted the APC state congress.”
The judge then held that Chief Cyril Ogodo is the authentic and duly elected chairman of the APC in Delta State. She also held that the plaintiffs are entitled to challenge the violation of Article 17 of the APC Constitution, pointing out that the action of the defendants was a breach of the rights of the plaintiffs.
“The plaintiffs claim is declarative; I am satisfied that the plaintiffs are entitled to the declarations sought,” the High Court Justice declared.
Justice Toyin Adegoke also held that the defendants flagrantly disobeyed the order of the court on 17/10/2018 that the parties to the suit should maintain the status quo, and that no name of candidate to contest the general elections on the platform of the APC should be submitted to the electoral body; an order that the defendants disobeyed.
The judge said: “This is obviously a flagrant disobedience of the order of this court. The claims of the plaintiffs succeeded. The plaintiffs are the valid executive of the party in Delta state. Anything that the defendants did or purported to have done, including the conduct of the elections is in flagrant disobedience to the order of this court, including the submission of the names of the candidates to contest the elections to the electoral body.”
The judge then declared that all the reliefs 1-13 sought by the plaintiffs succeeded, and so held.
Accordingly, the judge said she could not uphold any of the writs and oppositions made by the defence for lack of substantial proofs.

The implication of this judgment, therefore, is that since it was the action of the Prophet Jones Odeh Erue faction that produced Chief Great Ovedje Ogboru, Senator Ovie Omo-Agege, Rev. Francis Waive and all the other APC candidates by the false Erue executive committee, by the declaration of the court, these candidates are not the real candidates of the party in the 2019 general elections.

Delta APC watchers will recall vividly that the authentic leadership structure of the party in the state had been enmeshed in an endless and sometimes tragic rigmarole since the conduct of the party’s Congresses last year, between the Prophet Jones Erue led faction and the Chief Cyril Ogodo tendency of the party.
A combination of allegedly procured legal judgements and the obvious preference of the party’s new national chairman, Comrade Adams Oshiomhole, as against the choice of former Chairman John Oyegun, had tilted recognition and authority in favour of the Jones Erhue faction, which had subsequently conducted party primaries from which the likes of Chief Great Ogboru for Governor, Omo-Agege, Emmanuel Uduaghan and Doris Uboh for the three Senatorial zones, Reverend Francis Waive, Joel Onowakpko Thomas and Paul Adingwupu, amongst others for the different Federal Constituencies, as well as a host of House of Assembly candidates, had all emerged and their names forwarded to INEC as the APC candidates for the 2019 general elections.

The Cyril Ogodo faction had also conducted its own alternate parallel primaries that saw the emergence of Prof. Pat Utomi (Governor), Olorogun O’tega Emerhor and (eventually) Rt. Hon. Doris Uboh (after a dramatic last minute court pronouncement that sacked the much touted Mrs. Miriam Ali, aka Enyi kpakpando) for Delta Central and Delta North senatorial zones respectively, as well as another bunch of elected candidates for the State House of Assembly contest, amongst others.

They had also sustained their legal pursuit, initiated immediately after the party congresses, to be recognised as the authentic APC Executive in the state, even as a flurry of several concerted efforts to reconcile both factions, including near successful interventions by the Vice President, Prof. Yemi Osinbajo, which ultimately led to the widely reported decision of Olorogun Emerhor, as the leader of the Cyril Ogodo tendency, to close ranks with the Erue faction, spearheaded by Great Ogboru and supported by strong APC Chieftains like Omo-Agege and Dr. Uduaghan, in order to present a formidable collective structure for the battle against the PDP in the Governorship elections of March 9, already secure in the knowledge that President Muhammadu Buhari had won the presidential election and had been reelected for a second tenure.
The judgement of Justice Toyin Adegoke of the Asaba Federal High Court has now created a new crisis of identity and representational mandate for the already embattled Delta APC and the understanding of this ruling is that Chief Great Ogboru, Senator Ovie-Omo Agege, Dr. Emmanuel Uduaghan, Rev. Francis Ejiroghene Waive, Joel Onowakpo Thomas, Jaro Egbo and others who emerged as APC candidates through the primaries conducted by the Prophet Jones Erue executive, are never the true candidates of the APC on record.

In order words, they are false candidates produced by a false and an impostor executive of the APC that is not recognized by law. 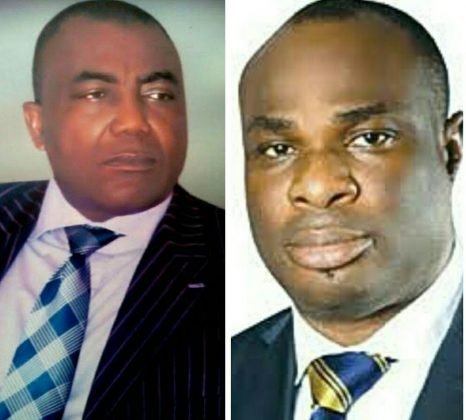 Accordingly therefore, though not specifically pronounced by the Court, Prof. Pat Utomi, Olorogun O’tega Emerhor and others who were produced by the Cyril Ogodo executive committee are by the declaration of the court, the authentic candidates of the APC in the just concluded national and state elections and since it is political parties and their logos that are recognized as contestants in the election instead of individuals, the candidates that emerged from the Chief Cyril Ogodo primaries, will now automatically inherit the victory of the APC in the specific elective positions the party won in the 2019 general elections.

Olorogun O’tega Emerhor is now therefore, the Senator-elect of the APC for Delta Central and not Senator Ovie Omo-Agege, while Olorogun Ima Niboro, former spokesman to former President Goodluck Jonathan, now replaces Rev Francis Ejiroghene Waive, as House of Representatives member-elect for Ughelli North, Ughelli South and Udu federal constituency. Prof. Pat Utomi, will now ostensibly continue the legal challenge at the election Tribunal initiated by Chief Great Ogboru against Governor Ifeanyi Okowa, while the legal challenges of Dr. Uduaghan against Senator James Manager, as well as those of Joel Onowakpo Thomas against Rt. Hon Leo Ogor and Hon. Paul Adingwupu against Rt. Hon Ndudi Elumelu may not now be prosecuted with the same vigour under new candidates.

However, in a swift reaction to the ruling of the Federal High Court, Asaba, the Prophet Jones Erue faction of the Delta APC and Senator Ovie Omo-Agege, have collectively countered the supposed implied interpretation of the Asaba Federal High Court ruling by stating that no injunctive relief was made by the Court, against INEC or against the Party’s Candidates who contested for elective positions and won, in the just concluded 2019 general elections.

Godwin Anaughe, Senior Special Adviser Communications & Strategy to Senator Ovie Omo-Agege, the Prophet Jones Erue faction and the Omo-agege camp further stressed that a consent judgment, whose terms of agreement had been brokered by the National working committee of the party, was delivered by the Abuja Federal High Court and the said judgment, which is binding on all APC members had not been vacated by the Cyril Ogodo faction till date.
Barr. Imonina and Mr. Anaughe, citing specific legal authorities equally posited that the Party’s primaries that gave tickets to the Party’s Candidates, was conducted by General Lawrence Onoja (Rtd) election’s committee set up by the National Working Committee of the Party and by virtue of the relevant section(s) of the 1999 Constitution as amended, nobody can take advantage of being an elected members of any legislative House when he did not participate in all processes that led to the declaration of any particular person and that while the Federal High Court Abuja and Federal High Court Asaba, are Courts of coordinate jurisdiction, and so cannot override each other, in law however, when two equity are equal, the first in time prevails, which in this case is the Federal High Court Abuja ruling which remains unappealed till date.

The factional Delta APC publicity spokespersons then concluded by urging all genuine members of APC, Delta State not lose sleep over what he describes as “the little hiccups that the said judgement of today had generated”, even as Barr Imonina confirmed confidently that “the Party is looking into same with a view of approaching the Appellate Court for it to be set aside”.

Written by David Diai with source report from Chukwudi Abiandu