A woman who married herself four years ago has renewed her sologamy vows and celebrated by leading a wedding flash mob.

Sophie Tanner made the decision to marry herself in May 2015 in a ceremony that included her dad walking her down the aisle, bridesmaids and a first dance – after writing a book where a character does the same.

At the weekend, Sophie renewed the promises she made to herself and paraded through the streets of Brighton where her flash mob performed a synchronised dance to The Greatest Showman’s This Is Me!

For her vow renewal, she said she chose a slinky white dress and held daffodils.

Her friend, dressed in robes, acted as her priest and reaffirmed her vows for her as she promised to continue taking care of herself.

Sophie placed an eternity ring on her own finger, shaped as an eagle to represent honesty.

Sologamy is growing in popularity, with supporters of the idea seeing it as a way to commit to loving and caring about yourself and not relying on another person for happiness.

Sophie, from Brighton, has always spoken openly about her own experience of sologamy and said she felt blown away as she renewed her vows. 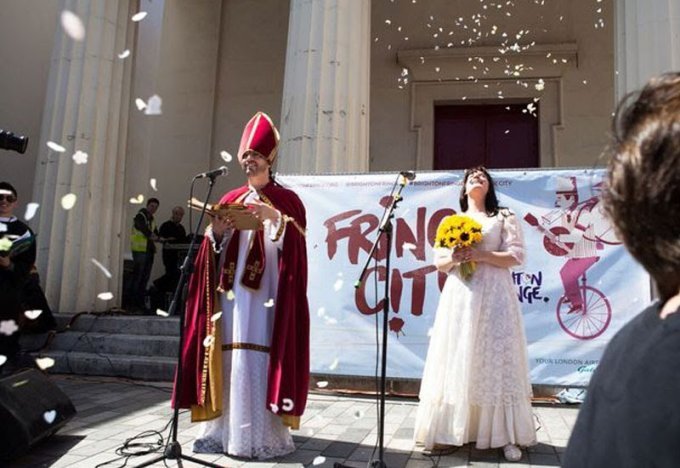 Writing a first person piece in The Stylist , Sophie said: “I’m so glad I renewed my sologamy vows because I don’t regret my decision for a single moment.

“I have learned that if you believe in yourself then others will, too.

“And I have realised that if love starts with you, there really is no limit to it; it is a glorious energy that just keeps marching on.”

She said her marriage journey so far has been about discovery of self-love, which she believes is just as important as romantic love.

Sophie spoke of her original vows and how she returns to them as a reminder of her self-commitment if shes having a bad day.

She admitted she has had to answer lots of questions and has been repeatedly forced to defend her position.

But she was overwhelmed with the support she received over the weekend and said crowds came to watch.

Sophie said she was so happy to mark the occasion with a dance, choreographed by Brazilian choreographer Marta Scott.

In the evening she gave a speech to thank everyone for her amazing day, and said even by the following day she couldnt stop smiling.

Sophies first novel, Reader, I Married Me was published on the date of her wedding anniversary.