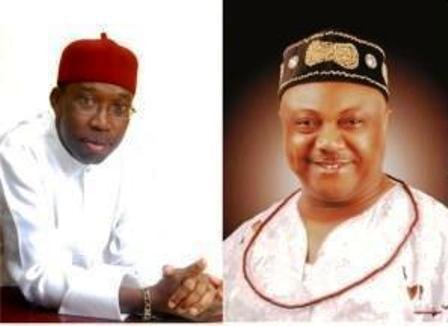 The Delta State Governorship Election Petition Tribunal sitting in Asaba, has resumed proceedings in the matter between Governor Ifeanyi Okowa of PDP and Chief Great Ogboru of APC, and is delivering ruling now, after a brief suspension caused by power outage in the Courtroom.

The tribunal had fixed today, Friday, Sept 20 for judgment in the petition filed by APC and Ogboru, challenging the victory of Gov. Okowa in the March 9, Delta state governorship election, after the filing and adoption of final addresses from all the parties.

Tribunal Chairman, Justice Sulaiman Belgore had only just convened sitting and counsels to all parties, as well as the representatives of the political parties had all announced their appearances, when the electricity supply suddenly ceased.

The court rapidly became uncomfortable for the judges, counsels, litigants, politicians and journalists, who all tried to endure the situation and carry on, in the hope that it was a normally experienced temporary glitch, which had often occurred in one or two previous Tribunal proceedings over the years.

But word soon filtered in and was confirmed, that a standby power generating set for the court had broke down few days ago and was yet to be fixed before the judgment day.

Justice Belgore, in view of the ugly scenario, the now unbearably uncomfortable courtroom which was filled to the brim and the rowdy environment outside, wisely adjourned proceedings for a proposed 10 minutes, to enable the technical session sort things out, amidst very tight security in and around the court premises on Ibusa road, next to the popular Grand Hotel and directly in front of the old Delta State Library, Asaba.