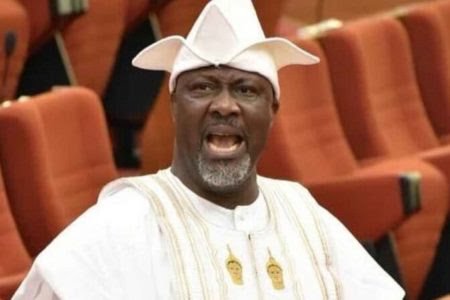 Maverick Kogi West politician, Senator Dino Melaye, of the Peoples Democratic Party, PDP, has expresses readiness to approach the International Community and the International Court of Justice, ICJ at the Hague with a comprehensive brief on the widely reported cases of violence that hallmarked the Kogi State governorship and Kogi west supplementary senatorial elections held on the 16th of November, 2019.

Melaye, whom initial but unofficial results had already seen coasting home to victory and retaining his Kogi West Senatorial seat in the Court ordered rerun election, suddenly found himself trailing dramatically to his opponent, Senator Smart Adeyemi of the All Progressives Congress, APC, and verging precariously on the brink of imminent defeat, having been officially dusted in the results already announced, until the Independent National Electoral Commission, INEC declared the election rerun inconclusive, on the ground that the canceled votes from 53 polling units, of 20 registration areas, were far more than the margin of difference in the votes scored by both men to declare a winner. Kogi West Senatorial zone has seven Local government areas.

The PDP candidate, who sadly lost a close relative as a result of gunshot wounds sustained during the election, lamented that the perpetrators of the violence which claimed the lives of his brother as well as many kogites won’t go free and while describing the Nov. 16 elections in the state variously as “helicopter election” and as a “Civil War,” had already held a press conference in Abuja on Sunday, where he rejected the results of the election, describing them as “magic results,” and accusing his All Progressives Congress opponent, Senator Smart Adeyemi, and Governor Yahaya Bello of using violence, intimidation and inducement to frustrate the electorate in areas where he was popular.

Expressing his readiness to take the matter to the highest International level Senator Dino Melaye said that what transpired in Kogi State on November 16, was no election, but what they had was a civil war that has claimed 16 lives so far. He then vowed to report Governor Yahaya Bello, his opponent Senator Smart Adeyemi, Sole Administrator of Ijumu LGA in Kogi West and Chairman of Kogi ALGON, Hon. Taofik Issa, Kogi State House of Assembly Speaker Prince Mathew Kolawole and an aide to the Kogi state governor reportedly in charge of Administration, Strategy and Planning at Kogi State Government, Mr. Sunday Faleke, to the international community and then proceed to the Hague.

“What we had in kogi is no election,what we had was a civil war that has claimed 16 lives so far. I will report Bello, Smart Adeyemi. Taofik, Speaker Kolawole and sunday Faleke to the international community and then proceed to Hague. This i promise..SDM”