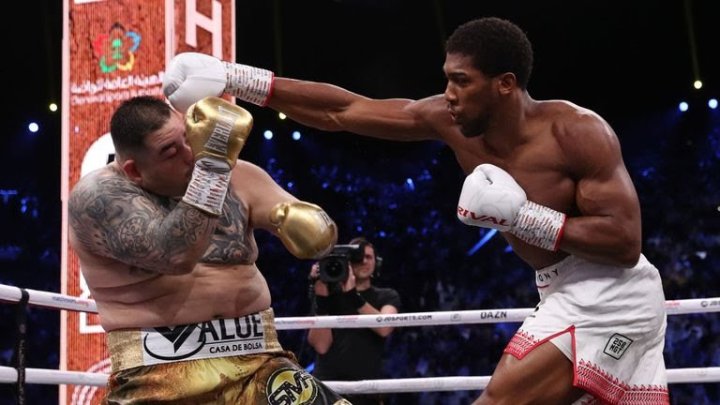 Anthony Joshua became a two-time word heavyweight champion by exacting revenge over Andy Ruiz Jr in dominant fashion with a unanimous points victory in a tense rematch in Saudi Arabia.Six months on from the night where Ruiz stunned boxing,

Joshua risked his career being left in tatters with a second defeat but served up 36 minutes of movement and well-timed punching to take the IBF, WBA and WBO titles back to Britain.

After cutting his Mexican rival inside the first round he simply never looked back and picked out smart jabs and right hands throughout before being serenaded with chants of “AJ, AJ, AJ” by the 14,000 or so fans in the largely full Diriyah Arena.

Ruiz never looked close to landing a knockdown and when scores of 118-110 118-110 and 119-109 were read out, Joshua jumped up and down in the ring in celebration, just as the man who had wrecked his US debut did in June.

Speaking after the fight, Joshua said: “I wanted to put on a boxing masterclass. First of all, thanks to God. The first time was so nice, I had to do it twice,” he said.

“I knew I could win this. This is about boxing, I’m used to knocking guys out. I gave the man his credit, I said I would correct myself, I respect Andy, But I wanted to put on a boxing masterclass.

“It’s the sweet science, it’s about hitting and not getting hit. No change in mentality, stay hungry and stay humble. I’m going to remain humble in victory. Thanks to Ruiz and his family, thanks to Saudi, the fans and thanks to God and Eddie Hearn,” an ecstatic Joshua gushed.