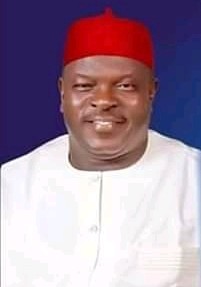 The Deputy Speaker, Delta State House of Assembly, Rt. Hon Christopher Ochor Ochor has commended the state government for the proposed state security outfit to help check insecurity in the state, describing it as a bold step that should be supported by all Deltans, indigenes and residents alike.

The Deputy Speaker, whose commendation was contained in a press release signed by his Press Secretary, Mr. Emmanuel Enebeli, on Wednesday, 20th May, 2020 further said the insecurity that has been witnessed in the state calls for concern, as it had become a big issue every good Deltan should be worried.

He pointed out that the establishment of the security outfit, to be known as “Operation Delta Hawk” is in tandem with good governance, as the security of the people should be the first in line of government actions and activities, even as he noted that the state had witnessed continuous violent incidents such as kidnapping, armed robberies, farmers-herders clashes within the past few weeks, resulting in the killings of many innocent persons.

“The announcement by the state government that plans had been concluded for the establishment of a state security outfit to be known as “Operation Delta Hawk”, is a welcome development. It could be remembered that this was part of the decision the South-South Governors Forum in their last meeting in Asaba, which they had agreed to and as the Chairman of the forum, the state Governors is implementing the decision of the governors in the zone.

“It could be noted that without protection of lives and properties, there is nothing like good governance. We had witnessed serious security threats recently. Lives and properties had been lost. We all have to support this proposal, for our good and thevgood of our people.”

The Deputy Speaker stated that it had been a policy of the Senator Ifeanyi Okowa government since inception, to promote peace and security, which had been one of the motive of a the SMART Agenda and STRONGER Delta policies and this has been demonstrated by the setting up the Security and Peace Committee made up of eminent Deltans.

Hon. Ochor pointed out that as a legislator representing his people in the State Assembly and now the Deputy Speaker of the legislature, he will lend his support to any law that will bring peace, save and protect the lives and wellbeing of the people, which is part of what the operations of “Operation Delta Hawk” is meant to achieve.

“It could be noted that the policy of the state government from 2015 had focused on peace and security, which is one of the policies of the SMART Agenda, to build a STRONGER Delta, which eminent Deltans were constituted as members of this advisory committee.

“The State Governor, Senator Ifeanyi Okowa knows the place of peace in national development, I commend him for this move and as a legislator and Deputy Speaker of the State House of Assembly, representing my people, I will support any move that will bring peace and harmonious living in the state.”

He called for the understanding of other security organisations when the security outfit takes off and for complete cooperation as every legal security outfit is meant to promote peace for a harmonious living among the people.

“I however call on the existing security services to give maximum support to this idea of the State Government. They should see “Operation Delta Hawk” as a sister organisation. Let there be cooperation. They should remember that they should complement each other to achieve a safe society for the people.

“I commend the State Governor, Senator Ifeanyi Okowa for this initiative to give maximum protection to lives and properties of Deltans and non Deltans living in the state, and those who transit the state to carry out their economic and social activities. This is a bold step. We all must support it,” he said.