Delta Government on Wednesday said the Ayakoromo Bridge linking Burutu and Ughelli South Local Government Areas in the state would be vigorously executed as a top priority project.

The Commissioner for Works, Chief James Augoye, made the disclosure in Ayakoromo while speaking to newsmen shortly after inspecting ongoing construction of the bridge linking Ayakoromo in Burutu and Egbo-Ideh community in Ughelli South Local Government Area.

He stated that the project whose contract was awarded in 2013 was one of the critical infrastructure inherited from the previous administration.

Augoye said that the project had a budgetary provision of N1 billion in the 2020 budget and was the only project not affected by the recent downward review of the budget as a result of economic downturn occasioned by prevailing COVID-19 pandemic.

He disclosed that more funds would be released to the contractor soon to enable it to mobilise back to site to complete the piling works in the water.

He said that with work at 68.5 per cent completed, the project would be up-scaled in 2021 and ensure that it was completed before the end of the administration in 2023.

The commissioner thanked the Ayakoromo community for the cooperation given to the contractor, saying “the governor specifically directed me to visit the site to see what is happening here.

“From what I have seen, the contractor has not mobilised fully back to site, although there are some skeletal works going on here; he has assured me that they will mobilise fully from Monday.

“I want to assure the community and the contractor that the governor has taken this bridge as a top priority project.

“This is the only project whose cost was not reduced in the reviewed budget; it has a provision of N1billion in the revised 2020 budget and we intend to scale it up in the 2021 budget.

“The governor has also assured me that by next week, he is going to release funds to the contractor to facilitate the work.

“I appeal to the contractor to ensure that he returns fully to site by next week to complete the piling work, and once that is done, the work is as good as completed.”

“The project was awarded in 2013 and has been facing so much funding challenges, but when Governor Ifeanyi Okowa took over in 2015, he decided that this is one the projects that must be completed in the life time of his administration.

“So, it is our desire that this project will be completed and inaugurated before the end of this administration in 2023.

“As you can see, the piling work is almost completed and from the record before me, the contractor has achieved 68.5 per cent of the job which means that once the river piling is completed, the job will be delivered at the shortest possible time,” he stated.

Chairman of Ayakoromo community, Mr Miekoromo Moses, thanked the governor for the project and appealed for more funding to it to be completed on time.

“We, the entire people of Ayakoromo community appreciate Governor Ifeanyi Okowa for embarking on this bridge project since he came into office, and has brought the project to a reasonable level.

“We also express our appreciation to the governor for making out time to visit the project in spite of the COVID-19 pandemic,” he said. 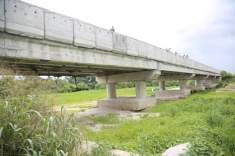