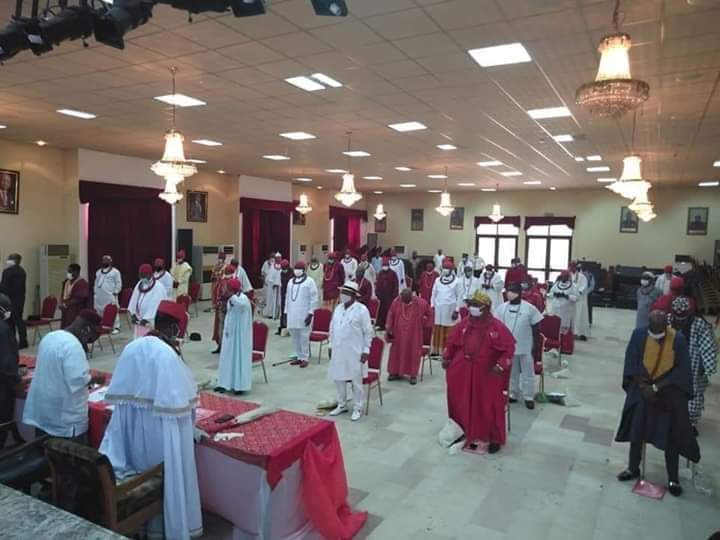 The Delta State Council of Traditional Rulers has called on the authorities to apply maximum weight of the law for perpetrators of rape and other gender based violence in the country.

The Royal Fathers gave the advice in a four point communiqué at the end of a meeting in Asaba.

The Chairman of the Council and Obi of Owa, Dr Emmanuel Efeizomor 11 who read the communiqué at the end of the quarterly meeting, condemned in the strongest terms the alarming rate of rape cases being reported in the country.

The Monarchs who alluded to recent cases of rape and murder of innocent Nigerians suggested that government at all levels should apply maximum weight of the law as deterant and pledged total support of the body to the fight against the act in its entirety.

While calling on the judiciary and law enforcement agencies to handle the issues of rape with a high sense of justice, the Royal Fathers insisted that anyone caught in the dastardly act should face the full weight of the law .
” we call on government at all levels to come out with more stringent measures to curtail the ugly trend”.

The Monarchs encouraged rape victims to speak out and appealed to lawyers and Judges to exercise Human Face in handling rape related issues to enable perpetrators and their cohorts get quick judgement to act as deterrent to others.

The Council also urged its members to adopt whistle blowing measures to arrest and prosecute drug dealers who sell hard drugs to rapist.

The Royal Fathers cautioned against stigmatization of victims saying that the menace of rape should be tackled with utmost seriousness and high sense of commitment.

On security, the Royal Fathers expressed total support to all steps so far taken by the state Governor, Senator Ifeanyi Okowa to tackle security challenges and enjoined him to remain steadfast and focussed.

They also congratulated Governor Okowa for his development efforts in the last five years and promised to support him in the actualization of the Stronger Delta Vision.