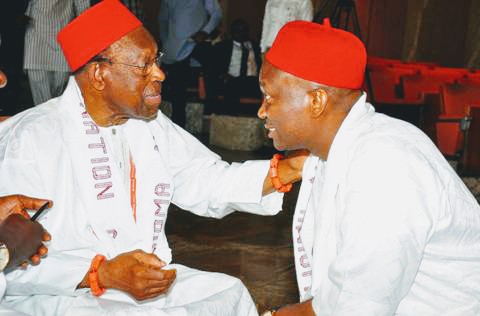 The Minority Leader of the House of Representatives, Hon. Ndudi Elumelu has felicitated the Asagba of Asaba, His Royal Majesty, Obi (Prof) Chike Edozien on the occasion of his 96th birthday anniversary.

In his good will message on Tuesday, 28th July, 2020, Hon Elumelu said that the life of Obi (Prof) Edozien has been amazing and a blessing not only to the people of Asaba, but humanity in general, saying that his intellectual and leadership qualities has paved way for development in deferent facet of human edervour especially in medicine and academics.

Elumelu commended the Monarch for being an exemplary king who has contributed immensely to the rapid transformation of the Kingdom of Asaba where he has sustained and strengthened the rich cultural heritage of the people, adding that his reign has witnessed the transformation of Asaba into a vibrant social and investment hub in the South Eastern region.

“Nnam, as you celebrate today, I appreciate you greatly for your fatherly role in the development of our dear State Delta. We will ever remain grateful for the stability your leadership as the traditional ruler has brought to bear in Asaba being the capital of Delta State.

“Your life and your reign have brought unprecedented prosperity to the people, attesting to the biblical fact, that when the righteous reign the people prosper. Your life has been an epitome of peace, love and unity and at 96, we look forward to benefit more from your ageless wisdom and intellectual abilities.

“As your loyal subject and on behalf of my family, the entire people of Delta State and Nigeria as a whole, I congratulate you on this auspicious occasion and pray that the Good Lord God Almighty, who has kept you so far, will continue to strengthen you in good health, sustain and keep you for His own glory, Amen,” Hon. Elumelu stated.