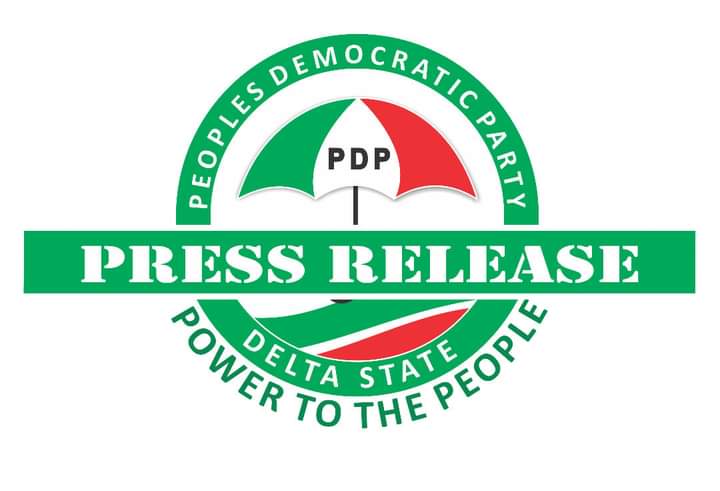 The Delta State Chapter of the Peoples Democratic Party, PDP has described the opposition All Progressives Congress, APC in the State, as a bunch of confused, unserious people, who don’t understand what Party politics is all about, adding that the confusion has now taken another absurd level, with a faction of the fractured party calling Barr. Sylvester Imonina, who has been signing all their recent spurious and incoherent press releases, an “Impostor” and challenging him to show evidence that he is indeed the ‘real’ Publicity Secretary of Delta APC.

A Press Statement by Dr. Ifeanyi Osuoza, Delta State PDP Publicity Secretary, which contained these observations, reads thus: “Is the APC in Delta State actually a political party or just a gathering of confused, unserious jokers, who have nothing better to do than bark, like lazy dogs, at everything they see or hear, without reason?

It is amazing that Barr. Sylvester Imonina, the self-styled Delta APC Publicity Secretary, does not understand that a simple matter like an election campaign, is one of the hallmarks of party politics and requires members of a political party to rally round their candidates and flagbearers towards achieving victory in an election, just as both PDP and his own party APC are doing now in Edo and Ondo States.

To even call on Governor Ifeanyi Okowa “to leave Edo politics for the Edos” in his rambling press release titled: “Prosperity For All Deltans, Now Poverty For All Deltans – Delta APC”, is really the most useless and worthless suggestion which unfortunately reflects the height of political emptiness, ignorance, and immaturity that defines the intelligence of the Delta APC Spokesman in political matters.

No wonder a faction of his party, obviously fed up with the bad image and negative reputation the publicist has built for his party, as a group that lacks the intellectual capacity to articulate and grasp the process of governance and party politics, recently cried out and issued a damaging press release declaring that: “The attention of the SWC of the All Progressives Congress, Delta State has been drawn to a report by one impostor called Barr. Sylvester Imonina”

The author of the Press release, Mr. Okpako Felix. who signed it as “State Publicity Secretary, APC, Delta State”, declared categorically that: “I remain the State Publicity Secretary who participated in the congresses and my name is there in the consent judgement list, for clarification” and after alleging that the factional Chairman, “Mr. Jones Erue and his accomplice, Mr. Theodore Ezonfade transferred millions from the party account into their personal accounts,” concludes authoritatively that he hopes, “this document would clear the air and shut the mouth of that impostor” (Barr Sylvester Imonina).

This press release, as damaging as it is, also arguably explains why Barr. Sylvester Imonina, hungry for some kind of recognition in his overzealousness to justify the burden of his illegitimate impersonation as spokesman of APC, embarked on his voyage of self-deceit and promotion by commenting on every issue with the irrelevance of nuisance and diversionary intentions.

Suffice it to say that having now been shamefully and embarrassingly exposed as an alleged impostor Publicity Secretary, the effort to respond to his recent ignorant press statement, is only substantiated by the need to educate him and set the records straight that first of all, the PDP is one united, happy, cohesive family, unlike the APC and we look out for and support our members all over the Country.

Secondly, our own Governor, Dr. Ifeanyi Okowa, “Ekwueme” is the Chairman, PDP South-South Governor’s Forum and we need not remind Sylvester Imonina that since Edo State and indeed the entire South-South is now under the control of our great party, PDP and our governorship candidate is also the incumbent Governor, the mandate and ultimate objective of the South-South Chairman is to sustain our political domination and work hard to deliver our candidate to victory in the September 19, Governorship election. That is what party politics is all about.

Just as he has been brutally exposed as an impostor in APC, it is perhaps also possible that Sylvester Imonina is an impersonator Deltan too, otherwise, he would have realized that Edo and Delta are offsprings from the same root and that by voting/re-electing Governor Obaseki under the PDP Umbrella, the bonding and synergy between the two States especially in the areas of infrastructural development of the Bendel territory and achieving other laudable democracy dividends, would be more expansive and collective.

By the way, Imonina also calls on Edos not to take Governor Okowa seriously in his appeal for them to re-elect Governor Obaseki, so the question we want to ask the impostor APC Publicity Secretary is that: ls he now asking Edo people to vote for Osagie Ize-iyamu; a man, who his own sacked National Party Chairman and godfather, Adams Oshiomhole, has described as a fake pastor?

Is he telling Edo people to now vote for a man who, according to Oshiomhole, tells lies a lot, a cultist who poured acid on another person and destroyed his manhood, a man who cannot be trusted with power or money and a man who is presently in Court facing corruption charges? Is this the man who Imonina and APC want Edo people to vote for as their Governor? It just goes to show the kind of people who make up the APC. How sad indeed.

Sadly again, we have to remind the likes of Sylvester Imonina that the title of “Roadmaster” was bestowed on Governor Ifeanyi Okowa by none other than President Olusegun Obasanjo and it is indeed sad and unfortunate that the impersonator of Delta APC Publicity Secretary, will rudely and disrespectfully say in his press release that: “Shamefully, some political hangers-on call the Governor “roadmaster”, thus reducing the pedigree and phenomenal stature of a former President of Nigeria to a “political hangers-on”. This is the height of freedom of speech and licence to write taken way too far.

As for the reversion to the old minimum wage, it has been explained to the blockheads of APC times without number, that this is an expedient and emergency arrangement agreed to by the workers themselves, as a necessary sacrifice in recognition of the harsh economic reality that has overtaken the whole World with the outbreak of the Covid-19 global pandemic.

It is will also be instructive to refer the APC to the numerous, widely reported roads infrastructure that are being completed and delivered by the Governor Okowa led administration in our Local Government Areas on a regular basis, as well as the thousands of youths who are being empowered as STEPreneurs and YAGEPpreneurs in the very successful jobs creation and empowerment programme of the brilliant SMART Agenda.

On a final note, it is important to remind the likes of “Mr. Imposter”, Sylvester Imonina of the administrative truism that government does not only create jobs but it also creates the enabling environment that creates jobs and that is what the administration of Governor Ifeanyi Okowa has been doing in the last five years, with creative and well-structured initiatives, including those that are taking our youths and masses off the Streets, not only through the entrepreneurial jobs and microcredit programmes amongst others, even in the midst of the Corona Virus pandemic.

The administration has also equally accommodated most of these youths as aides and other auxiliary staff in gainful engagements which the APC detests with hateful bitterness, but which has taken these young Deltans off the Streets, saved them from a life that may have ended up in criminality, and given them a chance to grow and an opportunity to fend for themselves as responsible citizens who support their families. Sometimes, we wonder the manner of wickedness and bitterness that has transformed the exposed APC Spokesman into a hateful monster that will not wish young Deltans well, simply because they are in PDP, yet says nothing and sees nothing wrong about the battalion of ‘aides’ employed by elected APC politicians across the Local Government Areas where they managed to hold sway.

We equally advise him to find time to also read up and see the impactful initiatives, projects, and programmes which the administration of Governor Ifeanyi Okowa is putting in place and delivering through the very articulate SMART Agenda, in the concerted effort to build a Stronger Delta and deliver prosperity to all Deltans.

PDP! Power to the people!!