The Sole Administrator of the Rivers State Waste Management Agency (RIWAMA), Bro. Felix Obuah has declared that he would not relent in promoting tourism and hospitality in Rivers State and Nigeria at large.

Bro. Obuah who made the declaration shortly after receiving the prestigious award from the management of the nation’s top tabloid, The Sun Newspaper, in his RIWAMA office in Port Harcourt on Monday, said he would seize every opportunity given to him by God to engage in ventures that would improve the welfare of humanity.

At a brief ceremony which was witnessed by senior management of The Sun group of newspapers, led by its Managing Director/Editor-in-Chief, Mr. Onuoha Ukeh, principal officers of RIWAMA, leadership of Ogba Egbema/Ndoni (ONELGA) Legislative Assembly, some members of the Rivers State House of Assembly, Special Advisers to His Excellency, Governor Nyesom Ezenwo Wike, former Commissioners, friends and well-wishers, Bro. Obuah said his foray into the hospitality and tourism industry was driven by his passion to create employment opportunities to the teeming youths in the State as well as making Omoku, the headquarters of ONELGA, the tourism destination of the State.

Bro. Obuah who is the immediate past Chairman of the Peoples Democratic Party (PDP) in Rivers State, described The Sun newspaper as a credible news medium where investigative journalism is exemplified, praying that the Almighty God would make the newspaper to excel beyond the shores of Nigeria.

He said he had since learnt that every act of benevolence shown to mankind is richly rewarded by God, adding that it gave him the conviction and motivation to do more.

Bro. Obuah who is also the Founder Sole Sponsor of Go-Round Football Club of Omoku said he regarded his choice for the award as a privilege and an act of grace as, according to him, there were tens of thousands of others eminently qualified for the award.

He expressed gratitude to God and to the cross section of Nigerians who deemed him fit for the award, and pledged his devotion to the promotion of hospitality and tourism not only in Rivers State but Nigeria as a whole.

“I draw my inspiration from the exemplary style of His Excellency, Chief (Barr) Nyesom Ezenwo Wike, CON, Governor of Rivers State who is leaving no stone unturned to make Rivers State the tourism hub of the nation.

“I dedicate this award and many more to come, first to God Almighty whose abundant grace on me made this possible; to Governor Wike, ‘Mr. Projects’ and the Governor of our time, and to the generality of the good people of Rivers State and the less privileged in society for their continued support to what we are doing in the State”, said Obuah.

The Mba-Anabaragu 1 of Orashi Kingdom berated former Governor Rotimi Amaechi over attempts to demolish his Krisdera Hotels and Resorts, an edifice which today has showcased him to the world.

“My gratitude goes to Governor Nyesom Wike who in spite of all odds stood by me and revoked what the former governor wanted to do to the hotel. Amaechi knew that the hotel would bring development, employment and tourism for our people, but because of political differences, he felt it should be demolished”, Bro. Obuah said.

Earlier while handing over the award plaque and certificate of Award to Bro. Obuah, the Managing Director Editor-in-chief of The Sun Publishing Limited, Mr. Onuoha Ukeh commended Bro. Obuah for what he called his tireless quest for hospitality and humanitarian services to mankind.

“Many people know Bro. Felix Obuah as that powerful politician who
fought many battles and won them. But there are many other people who do not know the other side of you, which has been underlined by this award”, he said.

Mr. Ukeh said it was on that premise that the newspaper found Bro. Obuah deserving of The Sun Hospitality Personality of the Year Award
(2019), adding that the 150-room 5-star Krisdera Hotels and Resorts is
in his words, “incontrovertibly one of the best in the country”.

He said the award was earlier billed for presentation sometime in May,
2020 but was cancelled because of the Covid-19 pandemic.

The Sun’s Managing Director/Editor-in-chief also revealed that the
award presentation to the RIWAMA boss would alongside other recipients, be aired on three national and cable television channels November 28, 2020 with the title: “The Sun Award Night”. 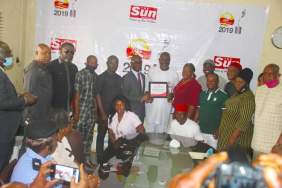