Senator Ordia stated this today, Thursday, October 15, 2020, according to a report by the State Commissioner for Information and Communications, Pastor Paulinus Nsirim, when the Rivers State Governor, Nyesom Ezenwo Wike led members of the Senate Committee on Local Loans and Foreign Debts and House Committee on Aids, Loans and Debt Management on a verification tour of federal roads executed by the State Government.

The projects verified include, the reconstruction of Ikwerre Road from Education to Agip Flyover Junction, construction of flyover at Agip-Rumueme-Abacha roundabout and the construction of the flyover on East-West Road at Obiri-Ikwerre with rotary turning and service lanes.

Others are, the 41.26 kilometers dualization of Airport/Isiokpo/Elele/Omerelu section of Port Harcourt to Owerri Road, construction of Eleme Junction Flyover and Interchange and the construction of Phases One and Two of Ada-George Road.

Governor Wike also led the team on an inspection of the Rebisi, Rumuogba and Okoro-Nu-Odu, Rumuola and GRA flyover bridges under construction by the State Government

The Senate Committee Chairman on Local Loans and Foreign Debts commended the State for the quality of roads that were constructed.

He advised other State Governments to emulate the Rivers example by applying for the execution of federal projects in order to complement the efforts at the centre.

“In line with Section 88 of the 1999 Constitution, the Federal Government has requested for the resolution of the National Assembly for the approval of the reimbursement of N78.9 Billion through the issuance of promissory note to Rivers State.

“We have gone round the eight projects and I can sincerely tell you that the projects were executed in line with international best practices.

“It is not easy to see quality projects executed this way. We have seen that most of the projects were executed by renowned contractors in Nigeria who are also working for the Federal Government.

”I want to thank the Rivers State Government under the leadership of Governor Nyesom Wike for what they have done in terms of infrastructural development,” he stated.

Also speaking, the Chairman House Committee on Aids, Loans and Debt Management, Hon. Ahmed Safana said members of the committee are satisfied with the federal projects executed by the State.

He noted that members of his committee are impressed and proud of the developmental strides of Governor Wike.

Responding, Governor Nyesom Ezenwo Wike thanked members of the committees for the physical verification of the projects.

He stated that the decision of the State Government to execute federal roads was to promote the socio-economic development of the State.

“I am happy that members of the committees saw all the projects executed by the State Government.

“It is the duty of the committees to go back and present their reports and take a final decision.

“Our responsibility is to enhance economic activities by making sure that our people live comfortable lives.

“If these roads are not constructed it will affect businesses and impact negatively on economic activities in the State,” he said. 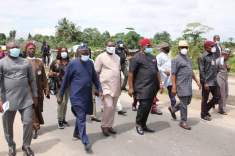