Delta Governor, Sen. (Dr) Ifeanyi Okowa, has called on stakeholders in the health sector to focus on surveillance and routine immunisation to ensure that Nigeria and Africa keeps polio at zero level.

Okowa made the call on Friday, October 16th, while receiving District Governor of Rotary International District 9141,Virginia Major, who visited him at Government House, Asaba.

He said that the importance of Rotary International in the society could not be over-emphasised, adding that the assistance it gave to ensure that Nigeria was declared free of white poliovirus was commendable.

He stated that Nigeria needed the services of associations and groups that could impact on the lives of citizens, especially the less-privileged.

The governor lauded Rotary International and other donor-agencies for partnering the country and the states in ensuring that Nigeria remained Polio-free, and called for sustained support and cooperation of the partners in ensuring sustained surveillance and immunisation of children against childhood diseases.

He reassured the state government’s commitment to ensuring that polio was kept at zero level in Delta, stating the ongoing free healthcare for children from zero to five years and pregnant women in the state was aimed at providing sustainable health care for the vulnerable.

“Now that we have attained the Polio-free status, we must keep our eyes focused on surveillance and routine immunisation to ensure that the virus does not return.

“It’s time for us to scale up routine immunisation to ensure that not less than 80 per cent of children are immunised against all childhood diseases.

“Rotary thinks more for the less-privileged and that is truly what we should live for and I am glad that you have kept this focus in all that you do.

“We will not call you an alternative government but we truly need alternatives to support the government to succeed because given the funding challenges we have, it is very important we need associations and groups to assist the government in reaching out to the people,” he said.

Okowa, who expressed worry over the growth rate in population without a corresponding growth in the economy, said that the nation was progressing towards creating more problems for future generations.

“We are growing more in population than the growth of the economy and it’s a huge problem for this nation and unfortunately we are not ready to talk about it.

“Birth control is very important and we can educate the families on the need for child spacing. I am glad that you are interested in National Child Health Development and we will partner you in this regard because we believe that our children and women should not die needlessly.

“Here in Delta, all our children under five years and all our pregnant women receive free medical treatment and we hope to scale it up to the rest of the population,” he stated.

On skills acquisition, the governor said that several vocational centres in the state ran six months training programmes in various trades, adding that several thousands of Deltans had graduated from the centres. 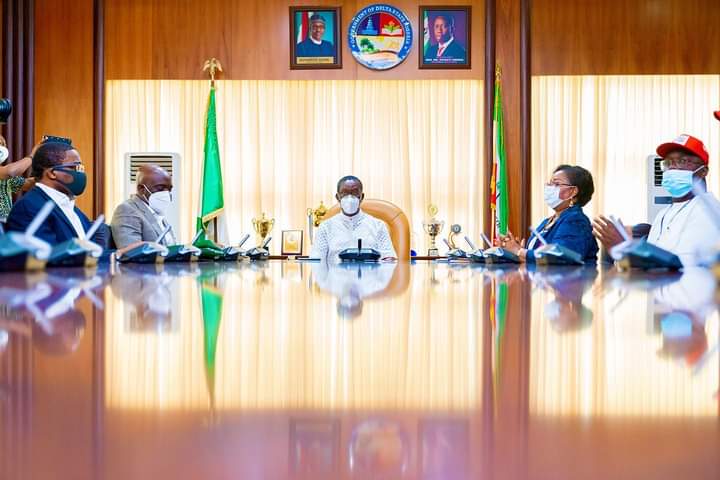 Earlier, Rotarian Major had told the governor that she and her team were in Delta to inaugurate several life-changing projects executed by Rotary Clubs in the state.

She said that the men and women of Rotary in Delta were doing phenomenal work that had led to the inauguration of 10 projects in water sanitation, economic empowerment and in other critical areas.

Major disclosed that plans were underway to build a Rotary Centre in the state that would train youths on skill acquisition.

“Our District is focusing on maternal and child health because statistics has shown that this area has been neglected and we are doing a lot to bring attention to this area.

“For over 20 years, Rotary International has been in the forefront for the battle against polio until 25th August, 2020 when the World Health Organisation (WHO) declared Nigeria and by extension Africa free from the virus.

“We will continue to sustain the campaign and awareness for immunisation and I appeal that you use your good office to sustain immunisation in Delta as no child is free until they are immunized,” she said.