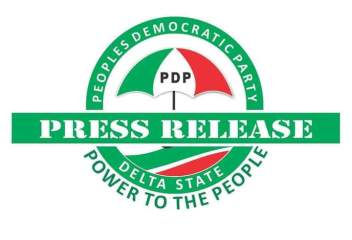 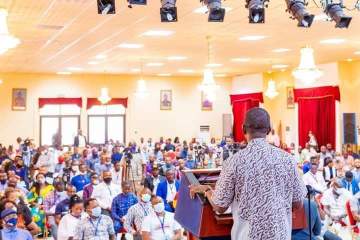 The Peoples Democratic Party (PDP) in Delta State wishes to commend His Excellency, Senator, Dr. Ifeanyi Okowa, Governor of Delta State for proposing to hold a Town Hall meeting with the youths of the State, and for going ahead and successfully holding the meeting that ended last Friday, October 30, 2020 in Asaba.

Nothing can attest more to the openness of heart of the Governor and his soft spot for the youths, who joined their colleagues across the Country to hold the #ENDSARS protest, through which they called attention to their plights in the hands of the police special squad called the SARS to the governing authorities at all levels.

Before mischief-makers introduced miscreants to infiltrate, hijack and unleash violence that led to widespread destruction, arson, looting, and the Lekki shooting of unarmed youths by men believed to be soldiers, the youth protest had been generally acknowledged as peaceful and well organized.

It must be noted that Governor Okowa has so far shown a disposition that points to the fact that the youths by their protest and demands have issues that should be addressed by those in authority. And almost immediately, he was at the forefront of setting up the panel of inquiry to look into allegations of misdeeds against aggrieved members of the public by the police.

He had followed up with appeals to the youths to stay calm and end the protest so that their demands could be properly looked into and with calls on his colleagues in authority to be mindful of the fact that indeed, the youths deserved to be heard and assuaged because they are a people wronged.

The Governor has not rested on his oars since then. He recently embarked on a Town Hall meeting with the youths of the State. Of course, it is acknowledged that Town Hall meetings are proper avenues for officials to hear the people’s views on issues that affect the public. Someone once said that Town Hall meetings “are a way for Local and National politicians to meet with their constituents either to hear from them on topics of interest or to discuss specific upcoming legislation or regulation.”

So far, the interactions between the Governor and the youths at the two-day Town Hall meetings have been fruitful. Governor Okowa has heard from the youths and they have heard him respond to issues raised by them.

He also called attention to the many programmes of the State Government put in place to address issues of unemployment, including policies of Government for job creation and wealth creation, skill acquisition, starter packs, and business loans financing windows. It is no gainsaying that the Okowa-led PDP administration is youth-friendly as can be seen in the many placements of youths both in the cabinet and other Departments and Agencies of Government. Yet, given the latest development of the youth protest, he is ready to do more, he told the youths during the Town Hall meeting, saying: “We have commenced a credible process of youths integration in governance, and it is a deliberate step to right the wrong and to ensure that the older generation of leaders handover governance and leadership to a set of well-groomed and experienced youths that will take this State to higher levels in the coming years.”

For us in the PDP, this is very cheering news and we believe that our youths should also be pleased with it.

It is against this background that we are reiterating the call of Governor Okowa on the youths to avail themselves of the gains of the jobs and wealth creation programmes by making themselves available for vocational training and skills acquisitions that will finally make it possible for them to become gainfully employed through the YAGEP and STEP programmes.

The Bureau for Job and Wealth Creation is available and willing to respond to any enquiries as to how to get placed in any programme of your choice.