The Deputy President of the Senate, Senator Ovie Omo-Agege has decried the diversion of the 13 percent oil derivation funds by oil producing states.

Specifically, he made a case for 100 percent utilisation of the funds for oil-bearing communities, as against the practice where states release only 50 percent of the money to development commissions in their states.

The Delta Central lawmaker noted that since host communities bear the burden of environmental degradation from the oil industry, it is only fair that all funds be channeled into the development of the affected areas.

He made the remarks when he hosted a delegation of Oil and Gas Host Communities of Nigeria (HOSCON), led by the Amayanabo of Twon-Brass in Brass Kingdom and Chairman, Bayelsa State Traditional Rulers Council, His Royal Majesty, King Alfred Papapreye Diete-Spiff

Senator Omo-Agege who chairs the Senate Adhoc Committee on Constitution Review, expressed regrets that the utilisation of the 13 percent derivation funds has become a political tool in the hands of state governors in the region.

He said the diversion of the money has contributed gravely to the underdevelopment of the region as the affected communities can hardly boast of having access to the basic necessities of life.

His words: “I have been discussing this matter with Chief (Wellington) Okrika even before I became a senator. It is fair that the 13 percent derivation is meant to ameliorate the conditions of the people who are most impacted by oil exploration and exploitation. That is the only reason this fund was set aside as a consequence of your agitation which you led for so many years.

“These funds are not meant for the state governments. The state governments are meant to be purveyors to host communities. Even in states that have development commissions, they only earmark 50 percent of the funds to the Commission to manage on behalf of the host communities. So what happens to the other 50 percent? We have always taken the position from the outset that 100 percent of the funds is meant for the development of host communities because it is not every area that suffers from oil exploration and degradation. But for some reasons, it has become a political tool”.

He reiterated his call for gas flaring penalties in the Petroleum Industry Bill to be paid to the host communities and not to the Federation Account, stressing that the annual contribution of 2.5 percent actual operating expenditure by oil companies to the Host Community Development Trust Fund should be increased to, at least, 5 percent, adding that the penalties from gas flaring would be used to ameliorate the living conditions in Niger Delta communities, as they suffer from the environmental impact of oil exploration.

“The reason we are insisting on at least 5 percent of operational expenses of oil companies for the host communities is because of the stability as their operational expenses will always remain stable. The moment you say it should be profit after tax, we know what they will do. They will claim all the exemptions that, at the end of the day, you end up with nothing. But they must have their expenses. So we are insisting that we should be given at least 5 percent of that.

“We say this because in the cause of our interaction with the Economic Management Team of the Federal Government, some of us wanted answers to certain questions, most especially why they were making less revenue from oil. And one of the reasons they raised at the time was that the cost of oil per barrel was very high because of the security cost to the oil companies.

“Under this PIB, if you give us what we are now asking for by way of enhanced contribution of 5 percent operational expenses to the Host Communities Trust Fund, what it means is that the communities will now assume responsibilities for the protection of the oil facilities in their host community. And if that is the case, the portion of the funds that the oil companies were spending as Security Cost should now be transferred to us,” he added.

On the proposed boards and management of Host Communities Trust Fund in the PIB, he emphasised the need for those in the host communities to be carried along.

He called on the people in the region to show more than passing interest in the development of the area and hold their leaders accountable.

Other lawmakers who assisted the Deputy President of the Senate in welcoming the guests include Senator Biobarakuma Degi Eremienyo (Bayelsa East), member of the House of Representatives representing Warri Federal Constituency, Hon Thomas Ereyitomi. 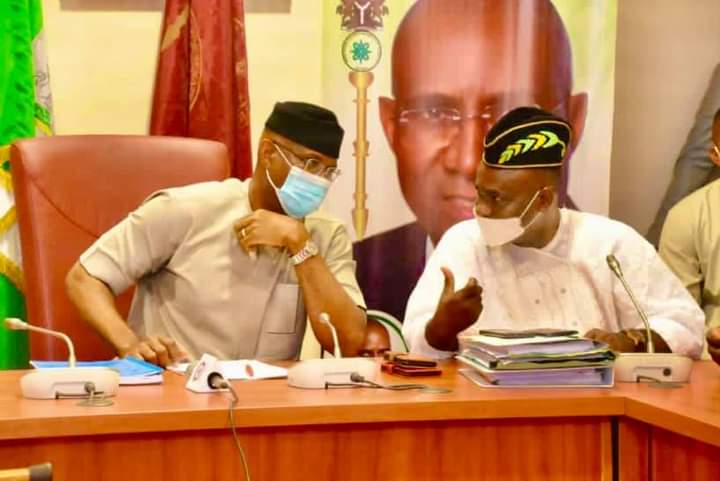 In his earlier remarks, the Senior Special Assistant to the President on Niger Delta Matters, Senator Ita Enang, called on the Deputy President of the Senate to intervene in the N98 billion gas flare fund, the controversy surrounding the Pipeline Surveillance Contract, 13 percent derivation payment to oil producing communities and the need to pass a bill for the establishment of a Derivation Commission.

According to him, the Niger Delta people should be engaged in the surveillance contract to give them a sense of belonging.

He also lamented the absence of development commissions in Rivers, Bayelsa and Akwa Ibom States.

The same sentiment was shared by the Amayanabo of Twon-Brass in Brass Kingdom and Chairman, Bayelsa State Traditional Rulers Council, Alfred Diete-Spiff, the Bolowei of Gbaramatu Kingdom, Chief Wellington Okrika, HOSCON National Chairman, Prince Mike Emu and a host of others who spoke at the event.

Yomi Odunuga,
Special Adviser, Media and Publicity, to the Deputy President of the Senate. 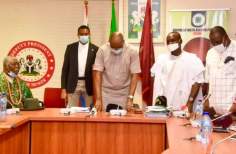 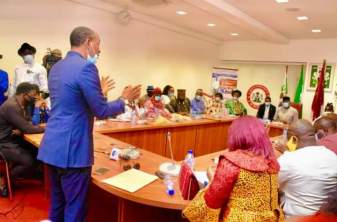 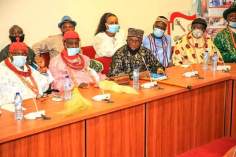 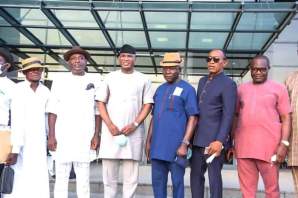 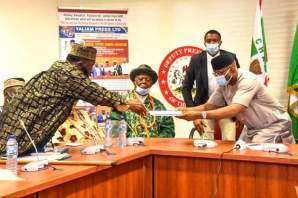 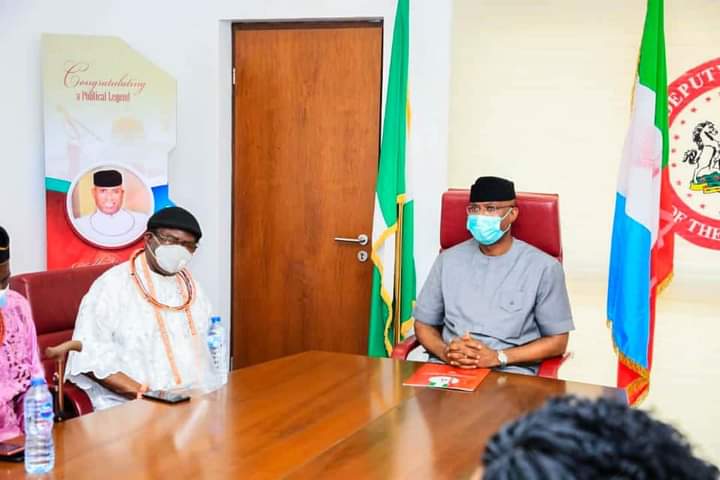 Recall that the members of the Host Communities of Nigeria (HOSCON), led by Chief Wellington Okirika, paid a courtesy call on the Deputy Senate President, Obarisi Ovie Omo-Agege, in October

Recounting the deliberation at that meeting on his verified social media Facebook handle, DSP Omo-Agege wrote:

Members of the Oil and Gas Host Communities of Nigeria (HOSCON) were in my office earlier today. They came to table some of the burning issues agitating the minds of members of these communities.

The leader of the delegation, Chief Wellington Okrika, wants us to intervene in the issues brought before the Federal Government concerning the Petroleum Industry Bill (PIB); Gas Flaring, 13 percent derivation payment to the states instead of the oil bearing communities, the 98 billion Naira gas flare fund and the controversy surrounding the Pipeline Surveillance Contract.

I told them to go back to their people in the Creeks and tell them we are here for them. We are here to champion their request. We don’t want the peace of the Niger Delta to be disrupted in anyway. We are here to protect the interest of our people.

Yes, I may be the Deputy President of the Senate today but, I am first of all, a Senator representing my people. I am theirs and I will not disappoint them. Our brothers in the Creeks have done well in keeping the peace. Their requests that have been channeled through me have been tabled before the authorities. We shall ensure the right things are done.

That I come from the oil bearing communities is one of the reasons why I am DSP today given our contribution to the economy of the country. It is therefore only natural that I champion the cause of anything that would promote the interest of the people of the Niger Delta.

The PIB is a very crucial bill. If properly handled, it would bring a lot of Foreign Direct Investments (FDIs). This is the best time to take advantage of the oil we have and the best way to do so is to encourage FDIs and this can only be achieved when the Niger Delta is peaceful. That is why I’m suing for peace.

The host Community component of the PIB law is of utmost importance to us in the National Assembly and we believe it should be a win-win for all stakeholders. And so, we are determined to ensure that we have an improvement on what we have before.

I am also confident that we have made a good impression with our colleagues and we would get something favourable for the oil bearing communities.

I am indeed very grateful for their visit.