The Rivers State Government has called on global investors to take advantage of the massive infrastructural development initiative of the Governor Nyesom Ezenwo Wike to open the State for investment.

Rivers State Commissioner for Information and Communications, Pastor Paulinus Nsirim made the call today (1/4/2021), when the leadership of the Port Harcourt Chamber of Commerce, Industry, Mine and Agriculture, PHCCIMA, in partnership with organisers of the Jazz On My Mind festival paid him a courtesy visit in his office in Port Harcourt.

Nsirim said the unprecedented infrastructural revolution being carried out by Governor Wike confirms that Rivers State is open for business.

“You look at the billions of naira that is being sunk in to developed infrastructure here. It is because His Excellency, Nyesom Ezenwo Wike, the Governor from day one wants to make Rivers State investors destination of choice. So when people come from all over the world to Rivers State, they see a State that is developed and open for business,” he said.

The Information and Communications Commissioner dismissed criticism of the N10 million monetary gifts Governor Wike gave to artistes who performed at the reception the State Government held for the Grammy award winner, Burna boy, saying that such gesture would not only help the beneficiaries further develop their talents but also spur those in the creative industry understand that they have a Government that appreciates their contributions to the development of society.

“In other climes, such gesture should have been celebrated. I like to say that His Excellency wants to leave Rivers State better than he met it and that is why development like this is happening in his tenure.

“Rivers state has never gotten a Grammy award winner before. There is a spiritual import to Burna boy winning Grammy award. What is happening with the likes of Burna boy is because of the leadership that is present in the State,” he said.

While commending the visitors, Nsirim expressed optimism that the Jaz On My Mind event billed to take place on the first of May in Port Harcourt would bring a lot of investors.

He assured that the relaunch of the C.4.I security architecture on Thursday to boost the existing Operation Sting is designed to make Rivers State safe.

“Even those coming for your festival can’t come into Rivers State if they have negative reports about the State. So their coming here for us is an endorsement that Rivers State is actually open for business

“This State has a potpourri of culture that you can’t find anywhere. We have cosin that is second to none. Our people are hospitable. Now we have the right infrastructure, we have the right leadership. So this is the place to be.

“Anybody that does not come to Rivers State is losing. We have an international airport, we have two seaports. Everything here is in the right nomenclature.

He announced the ministry’s endorsement of the Jaz On My Mind festival and assured the organisers of partnership adding that the Ministry was prepared to partner with any organisation and well meaning individuals who want to tap into the right business environment that Governor Wike has created.

Earlier, the President of PHCCMA, Chief Nabil Saleh and the Convener and Managing Director, LikeMinds Entertainment Ltd, Mr. Chinedu Clinton Johnson said they were on the visit to solicit the partnership and endorsement of the Ministry for the upcoming Jaz On My Mind festival.

They said the festival which began in 2012 is meant to showcase talents and Rivers State to the world that contrary to negative impression by detractors, Rivers State is indeed conducive for all manner of business investment. 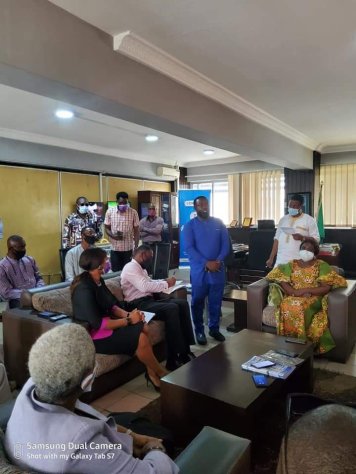