The Rivers State Commissioner for Information and Communications, Pastor Paulinus Nsirim has described the successful conduct of the just concluded local government election across the 23 local government areas of the State as a confirmation of Governor Nyesom Wike’s commitment to deepen democracy at the grassroots.

Nsirim said this while speaking to newsmen today (17/4/2021) after casting his vote in Unit 20, Ward 16 of Obio/Akpor Local Government Area.

“Governor Nyesom Wike has by the orderly and peaceful conduct of this election, demonstrated his commitment to deepen democracy in this country.

“He has been an advocate of credible and transparent conduct of elections and that is what we have witnessed in the State today.

“All over the state, we recorded peaceful, credible and transparent conduct of elections, ” he said. 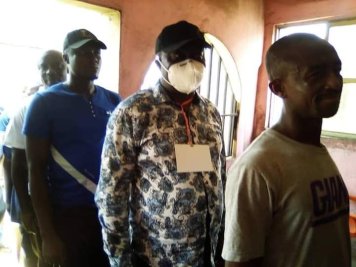 “The conducts of all categories of RISEC staff deployed to drive the processes of distribution of all materials, accreditation of voters to the counting and recording of votes, are highly commendable,” he said.

The Commissioner equally lauded the various security agencies for their show of professionalism before, during and after the elections.

He commended the electorate for demonstrating a peaceful conduct by casting their votes for the candidates of their choice at the various polling units across the State.

Nsirim also commended the candidates of all the parties and their agents for their peaceful and orderly disposition in participating in the exercise.