The Rivers State Government has restated its commitment to partner with the media at all times in order to consolidate on the delivery of infrastructural development and good governance.

The State Commissioner for Information and Communications, Pastor Paulinus Nsirim stated this on Monday, April 19, 2021, in a keynote address at the 2021 Media Day, organized by the Rotary Club of Port Harcourt, District 9141 in Port Harcourt, with the theme, ‘Developing Media Infrastructure for Good Governance’,

“Using the various media infrastructure in which a wide range of debates take place and variety of viewpoints represented, the Rivers State Government led by Governor Nyesom Wike has continued to deliver projects that impact positively for the betterment of Rivers State and her people.

“Between last year and the whole of the first quarter of 2021, Rivers State was on the global map as eminent citizens of Nigeria joined His Excellency, Governor Nyesom Ezenwo Wike to commission projects in eleven local Government areas of the State.

“This unprecedented development coming at a time when most leaders were hiding under the cover of the COVID-19 pandemic to cover their ineptitude will surely remain legendary,” he noted.

Nsirim asserted that many social commentators across the country have opined with convictions that the only person who can realistically beat the impressive record is Governor Nyesom Wike himself, especially when the next phase of projects commissioning would commence, “which will unveil some of the most amazing and marvellous legacy infrastructural projects ever seen in Rivers State.

“Project commissioning has become synonymous with the Governor Wike’s administration in the last five years and even against the backdrop of the noisome buzzing of a jobless, fragmented and confused opposition in the State,” he said.

The Commissioner who was represented by the Director, Public Enlightenment in the ministry, Mr. Celestine Ogolo, disclosed that modalities were in place to revamp all state-owned media organizations for competitiveness and productivity.

“As we speak, plans are underway to revamp the Rivers State Newspaper Corporation to enhanced its mandate and give it a competitive edge in the media industry, as well as digitalize the state owned broadcast media platforms.

Nsirim further stated that with the Digital Switch Over expected to take place in the state on July 8, 2021, broadcast stations in the State and consumers are in for good times.

He enumerated the advantages which the digital switchover will bring to the industry and the state, describing it as enormous.

“Over the years, the Rivers State Government has made huge investments in these MDA’s to underscore the importance attached to them in ensuring good governance, especially in the areas of rule of law, transparency, accountability, effectiveness, consensus-oriented, equity and inclusiveness and responsiveness.

“Aside these, the Rivers State Government under the visionary leadership of His Excellency, Nyesom Wike has been open to the infrastructure of independent media in the State to ensure good governance.

“The Governor believes strongly that good governance can be facilitated by a strong and independent mediascape,” he said.

Speaking, President of Rotary Club of Port Harcourt, District 9141, Mr Adeolu Okanlawon, said the Media Day was for the appraisal of the clubs activities, in terms of her public image.

Okanlawon further said the event was imperative, as it provides the Club an opportunity to project her activities on an annual basis, in terms of programs and projects, saying the country was still emerging, hence the government and the media must synergize for development.

In her remarks, Chairperson, National Association of Women Journalists, Mrs Susan Serekara-Nwikhana, urged the government to assist the media in the area of infrastructure and welfare.

She called for the building of a media village, which would house all media organizations in each state for better interaction and productivity. 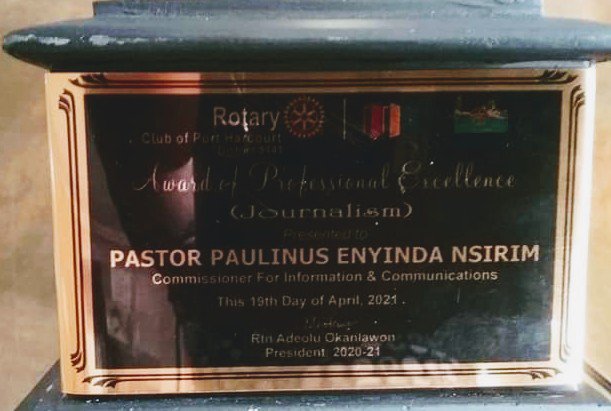 High point of the event was the award of Professional Excellence in Journalism to the Commissioner for Information and Communications, Pastor Paulinus Nsirim by Rotary Club.