Nigeria House of Representatives, has backed a statement by It’s spokesman, Rep. Benjamin Kalu, on the improper presentation of the motion by House Minority Leader Hon. Ndudi Elumelu, seeking the sack or resignation of Minister for Communications and Digital Economy, Malam Isa Pantami, on account of his admitted past comments supporting and sympathizing with some well known terrorist groups and their actions.

This was contained in a Press Release, signed by it’s Spokesman, Rep. Benjamin Kalu, which equally stressed the Zero tolerance of the House on terrorism in any form and while maintaining that it owes no apology to the minority caucus, chided Minority spokesman Francis Agbo for allegedly deceiving Nigerians in a horrible way and threatened to send the lawmaker to the House Ethics, Privileges Committee, for misinforming the public.

Recall that the Minority Caucus of the House of Reps, in a Press Statement signed by it’s Spokesperson, Rep. Francis Agbo, had taken a swipe at the House Spokesman, for claiming that the motion by House Minority Leader Hon. Ndudi Elumelu, seeking the sack or resignation of Minister for Communications and Digital Economy, Malam Isa Pantami, for his admitted comments and identification with some well known terrorist groups and their actions, for which he has also apologized to Nigerians, was improperly presented, and had demanded an apology from on Rep. Kalu, amongst other things.

But in a swift reaction, the Spokesperson of the House and Member representing Bende Federal Constituency, Rep. Benjamin Kalu, in another press release, stated that his office will not join issues with Rep. Agbo and while admitting that Hon Ndudi Elumelu, though a seasoned, experienced and celebrated legislator unlike his spokesman Hon Francis Agbo, had come under the wrong order on this issue, noted also that the presiding officer, the Rt. Hon. Speaker Femi Gbajabiamila promptly brought it to Hon. Elumelu’s notice in front of the whole world.

Hon. Kalu further stated that the House stands ready to give audience to Rep. Ndudi Elumelu or any other member of the House on this issue, provided that such audience is sought through the proper channels and brought under the relevant rules of the House and opted not to delve further to the content of the lead debate yet to be presented.

His press statement, issued for the sake of necessary clarity on the matter, reads thus:

Our attention has been drawn to the press release by one Hon Francis Agbo, who claimed to be the spokesman of the minority caucus, alleging that the speaker was wrong in not allowing the debate on the issue raised by the minority leader. My office will not join personal issues with him or go to the content of the yet to be presented lead debate but will not fail to insist, as follows; 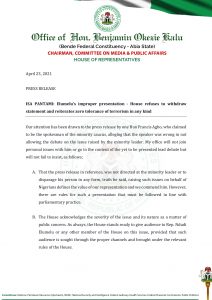 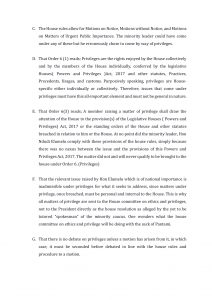 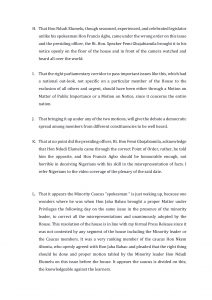 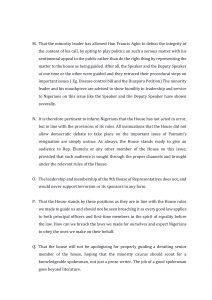 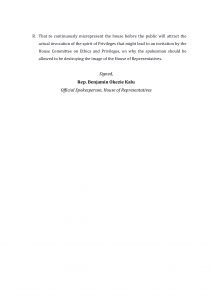