The Delta State Government said it will continue to meet the obligation of workers in the state as at when due.

The Governor of Delta State, Senator Ifeanyi Okowa made this known today during the 2021 Workers’ Day Celebration held at the Steven Keshi Stadium, Asaba.

The governor who was represented by the Secretary to the Delta State Government (SSG) Mr Chiedu Ebie stated that despite the financial constraints in the system, his administration would always prioritize the welfare of workers in the State.

Governor Okowa said since pre-independence days workers have been a vital part of the dynamics of Nigeria’s social-political and economic trajectory.

He said workers had continuously kept the nation on its feet in spite of the hardships that arose from time to time.

The governor urged them to remain resilient, hopeful and focused as his administration accelerates its determination and resolve to build a State of every body’s dream.

“All we expect from you in return is greater dedication, patience with us and remaining loyal to the government of the day,” he said.

He further stated that “As we celebrate this year’s Workers’ day, let me reassure you that my government is fully aware of the challenges faced by labour.”

He called on employers to use the day to reflect and evaluate the welfare, remuneration, condition of service, safety and state of workers among other issues.

While congratulating workers in the State for a successful 2021 workers’ day, he urged them to celebrate the Day with renewed strength, determination, hope, solidarity and unity.

The Governor advised Deltans to take note of the grave security situation in the country and report any suspicious movement to the security agencies.

Earlier in their separate remarks, the State Chairman NLC, Comrade Goodluck Ofobroku and his counterpart in the TUC, Comrade Martin Bolum thanked the State government for its continued support to workers.

They pledged that the entire work force of the State would continue to work in tandem with the stronger Delta mantra of the administration. 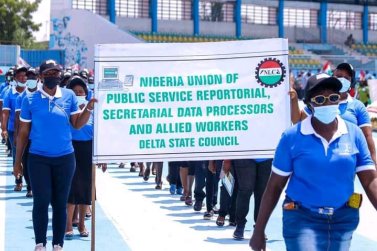 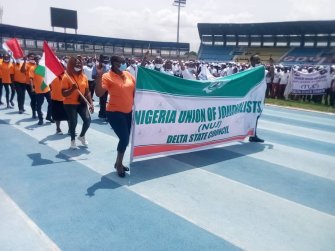