Governor of Rivers State, Nyesom Ezenwo Wike says those propagating the conspiracy theory that the Niger Delta is unsafe are the real enemies of the oil rich region.

The governor has meanwhile advised oil and gas companies operating in the Niger Delta region to always be mindful to implement the local content policy in order to foster cordial relationship with their host communities.

Kelvin Ebiri, Special Assistant (Media) to the Rivers State Governor,reports that Governor Wike stated these when he performed the groundbreaking of Giwa Gas FZE gas and fertilizer project at Okoroinyong village, Eastern Obolo Local Government Area of Akwa Ibom State on Wednesday.m, May 26, 2021.

He noted that if Akwa Ibom State is not safe there is no way any prospective investor will conceive the idea of building a gas and fertilizer plant in the State.

“If Akwa Ibom State is not safe will investors come here? Investors are here because the governor has provided an enabling environment that gives confidence to the investors. If a place is not secure for people to invest their money, we won’t be here.

“Don’t mind the enemies of the people who will always say that Niger Delta is not safe. If it is not safe can anyone come and invest money here?”

He lauded the management of Giwa Gas FZE for the decision to invest in Akwa-Ibom and by extension, the Niger Delta.

Similarly, Governor Wike commended Governor Udom Emmanuel for attracting investors to the state. He expressed optimism that the gas and fertilizer project will not only transform the economy of Akwa Ibom State but will create employment opportunities for the people.

The governor urged the company and other investors doing business in the State to always comply with the local content law in order to ensure cordial relationship with their host communities.

Earlier, Governor Udom Emmanuel explained that when he was campaigning for reelection in 2019, he promised to give a lot of attention to the riverine areas of the State

The Akwa Ibom State governor said the entire area where gas and fertilizer project is located will be transformed to industrial hub, while swampy area will be used to plant coconut that will feed a planned coconut refinery.

He urged the youths of the State to develop their capacity in order to take advantage of the tremendous opportunities that the industrial hub will offer.

Chairman of Sterling Energy and Exploration Production Limited, Tony Chukwueke said the gas and fertilizer project will be second largest in the country when completed. 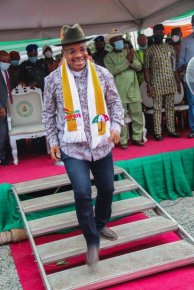