The former Commissioner for Higher Education and Commissioner Designate in the second list of Governor Okowa’s new cabinet appointment, Prof. Patrick Muoboghare has admitted that break in communication orchestrated the recent misunderstanding between him and the Delta State Council of the Nigeria Union of Journalists.

The Professor who made a dramatic appearance at the NUJ Temporary Press Centre at DDPA Housing Estate Asaba, affirmed he was supposed to defer to NUJ to brief the Press after his committee concluded its work on the newly created universities and made its recommendation to government.

According to him, “There was a break in communication as we concluded our assignment on the creation of the three new Delta universities.

“I was supposed to come to NUJ to brief the Press hence it was a new government project, but I didn’t do that. I have admitted that gap in communication. However, everything is sorted out and going forward, we will always do the needful”, Muoboghare admitted.

Speaking further, the erudite professor eulogized the Governor, Senator Ifeanyi Okowa for having done so much to leave behind as lasting legacies.

He said before now, no University in Delta was offering Architecture as a Discipline, but now, four of the Universities can now offer it. He also said two are now offering Medicine and another two offering Law, adding that such innovation was a product of hard and tedious mental work that had gained success.

Professor Muoboghare nonetheless, appreciated the NUJ Exco and members for their understanding, as he reassured that Public Private Partnership proposed for the newly created universities was not intended to leave the Tertiary Institutions in the hands of private businessmen but to create sustainable opportunities for their viability and quality outputs.

His words, “The creation of the universities was not intended to be pandered towards politics. We were meticulous enough to spread the universities evenly, which we recommended to government. Thank God Asaba as the State Capital was factored in, because everything about the State Capital must be about public relations. We were just recommending officers who ensured that what was recommended was reasonable and justifiable.

“Again, I thank the NUJ State Exco and members for their comradeship. We must continue to build fences as partners in progress. I am one of you, and so I am home. Because the Press made me from my days as ASUU Chairman, I must not take that for granted”, the former Commissioner said.

Also, Dr. Arnold Ojugo, a lecturer at the Federal University of Petroleum Resources Effurun (FUPRE), who accompanied Prof. Patrick Muoboghare to the Press Centre, commended the Professor and NUJ leadership for the simplicity exhibited in straightening things.

He praised the both sides for recognising that they were not at warring path but only finding a common ground to coexist harmoniously and progressively.

Meanwhile, the State Chairman of NUJ, Comrade Michael Ikeogwu appreciated Prof. Patrick Muoboghare for coming to clarify issues, instead of believing that NUJ was fighting him and government by its Congress Communique and Press Statement that followed afterwards.

He reiterated that the Union had no intention to fight government but only carrying out its watchdog role, adding that what transpired had opened a new vista of synergy to work honestly for the good of society.

Ikeogwu called on members to continue to support the Okowa-led State Government towards actualizing its mandate for a Stronger Delta.

It could be recalled that NUJ during its June 24, 2021 Congress, came up with a Communique, questioning the rationale behind the proposed Public Private Partnership (PPP), initiated by the Prof. Patrick Muoboghare-led Management Committee for the running of the newly created universities.

After the communique, Muoboghare had gone to DBS Radio to denounce the position of NUJ, describing it as ‘mysterious information’. This was also countered in a Press Statement by the union, calling on him not to mislead Deltans.

In the light of the above, Prof. Patrick Muoboghare, Dr. Arnold Ojugo and Comrade Michael Ikeogwu (NUJ Delta State Chairman) were invited to discuss the new universities on “The Matter For Ground”, a DBS magazine programme of Wednesday 14th July, 2021. 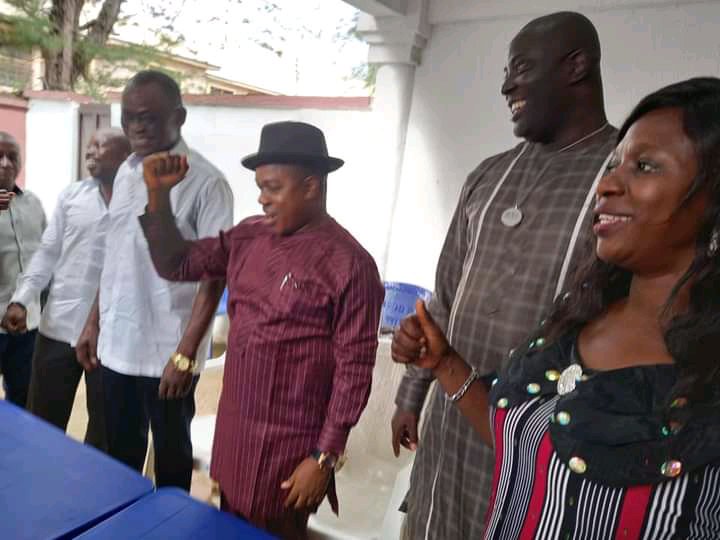 It was after the programme that Prof. Patrick Muoboghare drove straight to the Press Centre with the NUJ chairman to lay to rest every form of dispute or misunderstanding as the case may be. He was welcomed and given a rousing reception as a senior Comrade in union matters.