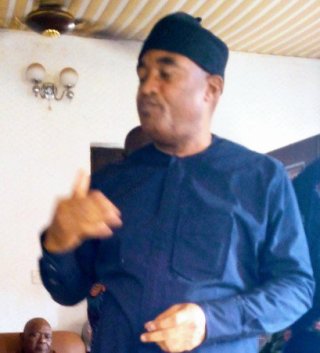 He gave this undertaking during an enlarged breakfast assembly of the Aniocha North APC held at Issele-Uku.

According to the seasoned legal consultant and astute politician, “As a high-stake formation partner in the party, I have been a steadfast advocate of unity as a prime tool in attaining set out goals of the APC, prominent amongst which is, providing the populace positively impacting governance in Nigeria largely and Delta State in particular”.

He further averred that, the party in Delta State is endowed with sterling human and related attributes, to record and harvest abundant electoral successes, but regrettably, the birth of “tendencies” into the Delta State APC family, has continually prevented it from accomplishing its full electoral potentials in the state.

In his introductory speech, another foundation member of the party, Engineer Ogwugwuam Ezeagwu described the aspirant as a man with insightful vision, whose antecedents stand him in good stead to administer the party to high-volume status in the state, stressing that, “the aspirant has all essential qualities to fulfil his promises, considering his cosmopolitan relationship with leaders and members which cuts across all three senatorial districts within the state”.

In a motion moved by Ogbuefi Ben Anazia and presided over by Sir (Dr) Vincent Ugbelase, the gathering, through undivided voice votes, accepted and applauded Barrister Ashibuogwu’s aspiration and urged all progressively inclined members to see to see the project to fruition.