In a bid to complement government’s effort in the provision of quality healthcare for people at the grassroots in Anioma region of Delta State, Nigeria, a non-governmental organisation, OMIWA Foundation, in collaboration with Anioma Medical Professionals Forum, conducted free medical outreach for residents of Ezi community and environs, on Saturday 17th and Sunday 18th July, 2021.

The two-day medical outreach which was held at the Community Hall, Obi’s Palace, Ezi witnessed large turnout, with over 400 beneficiaries.

The beneficiaries were majorly screened and treated for glaucoma, cataracts, high blood pressure, arthritis, malaria, waist pain, ulcer among others.

The foundation’s programme coordinator, Mr. Tohan Okenyi said that the idea of free medical outreach among other humanitarian services of OMIWA Foundation, was borne out of the abundance of the heart and the goodness of God to provide succor to people in need at the grassroots.

“I’m delighted at the success records of the medical outreach since inception and the joy expressed in various ways by communities visited and beneficiaries alike. We return all the glory to God Almighty who made it possible”, Okenyi declared.

Mr. Okenyi disclosed that: “the Initiator and President of OMIWA Foundation Dr. Sam Okenyi and the Vice–President, Mr. Felix Okafor, sends their goodwill messages to the people of Ezi, while they expressed commitment to the wellbeing of our people and the development of communities in Anioma and Delta State as whole.

“Accordingly, the foundation will continue to explore possible avenues and also engage relevant stakeholders and communities through dialogue and advocacy for access to good and quality healthcare.” 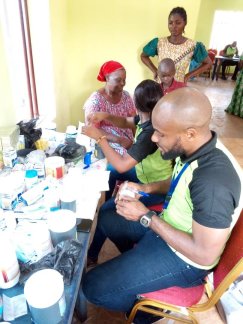 He further emphasized the need for regular health check for early detection of illness before it becomes life threatening.

Earlier, His Royal Majesty, Agbogidi Obi Emmanuel Mohanyem, the Obi of Ezi, represented by Chief Tony Ezeagwu, in his opening remarks, thanked OMIWA foundation and its partners, for remembering Ezi community for the free medical outreach.

The Royal Monarch admonished the good people of Ezi and environs, to see the medical outreach as a divine intervention and urged them to take advantage of the free medical services by coming out en masse.

Similarly, during interaction with newshounds, two of the stakeholders in the community, Mr. Eric Onyejoseh, President of Ezi Mandate and Hon. Patrick Ngbakwulu, Councillor representing Ezi community, in separate interviews, posited that Ezi and its development associations will continue to extend hands of fellowship to OMIWA foundation and its partners on programmes and projects that will be benefit Ezi community and environ.

The duo equally thanked the foundation for finding Ezi community worthy of such gesture.

Some of the medical doctors and other care givers at the two-day outreach, expressed delight at the success of the programme, going by the large turnout, the service rendered and the orderliness of the beneficiaries.

They commended members of EZI MANDATE for the mobilization of the people and the adequate security provided.

In appreciation, the medical personnel were presented with Certificates of Excellence by Dr. Charles Ochei, Chairman, People’s Democratic Party (PDP) in Aniocha North.

Dr. Ochei also challenged the good spirited individuals in Ezi to emulate OMIWA Foundation for the betterment of Ezi community and Delta State in general.