Delta Governor, Sen. (Dr) Ifeanyi Okowa, on Wednesday, July 28, said the government and people of the state were proud of Minority Leader of House of Representatives, Chief Ndudi Elumelu, for his impactful leadership and quality representation of his constituents.

Okowa gave the commendation while inaugurating constituency projects executed by Elumelu at State’s headquarters of Department of State Service, Asaba.

The projects include a Staff Clinic and residential quarters for men and officers of the command.

The governor stated that worsening security situation in the country was threatening education and food security and commended the lawmaker for investing in the security of his people.

He lauded the lawmaker for always coming home to consult with his people for first-hand knowledge of their needs and for always reaching out to the state government on strategic issues.

“We thank God for the life of our dear son and representative of Aniocha/Oshimili Federal Constituency, who is also the Minority Leader of House of Representatives.

“A few weeks ago, I was at his empowerment programme and I was amazed with what I saw, and today again, we are here to inaugurate constituency projects executed by him.

“He is aware of the security challenges in the country and his investment in providing these facilities is a well-thought out process and I must thank our son and brother for what he has done here,’’ he said.

Okowa expressed delight with the facilities being provided by Elumelu at the DSS command, saying I am truly proud of what I am seeing here.

“His voice is good for our nation and the voice of the opposition must be allowed to be heard sufficiently and must be truly spoken.

“I can truly attest to the fact that he is doing well in the House of Representatives. I thank you for the work you are doing in the National Assembly and I must say we are very proud of you.

“I must also thank you for always returning home to your people to ensure regular communication and effective representation for them.

“We are proud of your representation and we pray that God will continue to bless you and enable you to do more for the people.

“Insecurity is beginning to pose challenge to education and food security and it is my hope that security agencies are fully funded to enable them to secure our nation effectively,” the governor stated.

Earlier in his remarks, Elumelu had said that the inauguration of the projects was the commencement of a three-day inauguration of various development projects in critical sectors of communities in the constituency.

He said that he got inspiration for the provisions he was making for his people from Governor Okowa’s Stronger Delta mantra and “inner passion for my people’’.

“This flag-off ceremony by your Excellency, kickstarts a three days commissioning of various development projects in critical sectors of life across the various communities and towns that make up my Aniocha/Oshimili Federal Constituency, in fulfilment, by the Grace of God, of my campaign promises to my people.

“Inspired by your Stronger Delta mantra and my personal inner passion for my people, I have remained resolute in my commitment in making their development, welfare and improving of their living standard the focal point of all my activities and actions as their representative.

“On May 15th 2021, your Excellency graciously performed the formal presentation and distribution of empowerment items including hundreds of tricycles, motorcycles, deep freezers and electricity generating sets to beneficiaries in Aniocha/Oshimili Federal Constituency, as part of my efforts towards improving their living standards in addition to other interventions in various sectors of endeavors.

“Today (28/7/21), you are flagging off a three day commissioning of a lineup of projects beginning with the new staff quarters and clinic for the Department of State Services (DSS) here in Asaba, a Vocational Centre in Oshimili South Local Government Council premises, Asaba, the drainage in Ogboli Road Ibusa and the Civic Center, Ibusa,” he said.

Director-General of DSS, Mr Magaji Bichi, commended Elumelu for his astute representation of his constituency and great investment in the Service.

Represented by a Director at the Headquarters of the Service, Mr Mohammed Ngoshe, the Director-General said that the service was grateful to the lawmakers for his kind gesture and urged all politicians to emulate him in enhancing the welfare of their people.

He further said that with Elumelu’s gesture, his men would be more focused and committed to ensure security of the people of the state.

“The Delta State Command headquarters of the Service used to be the worst in the country but today I am proud to say that it is now the best State command and a model in the country.

“Accommodation is a major challenge to the service and your investment in providing accommodation for almost all the officers of the state command is worthy of commendation,” he said.

He called on governors of states in the South-South to put heads together to ensure the take-off of DSS Training Center in Calabar.

Welcoming guests earlier, the Director of the Service in the state, Mr Ademola Adebiyi, said that Elumelu had contributed immensely to the development of the Command, with the construction of the clinic and 48 flats of residential accommodation, 20 of which were inaugurated by the governor while 28 were still under construction.

He commended Elumelu for the laudable projects and prayed that God would continue to bless and elevate him. 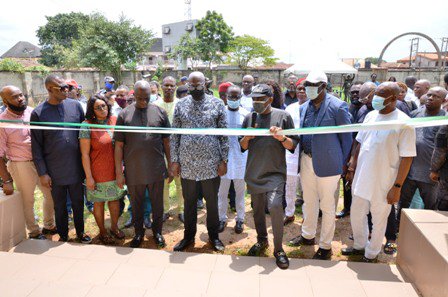 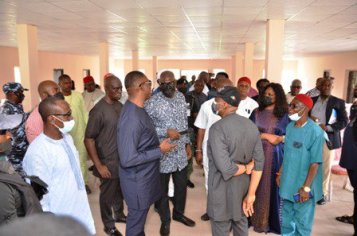 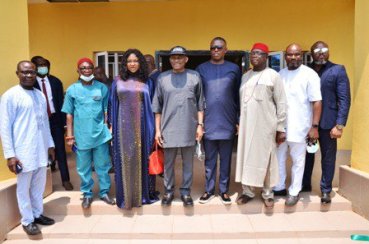 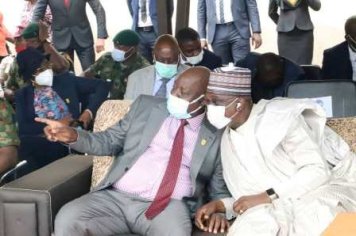 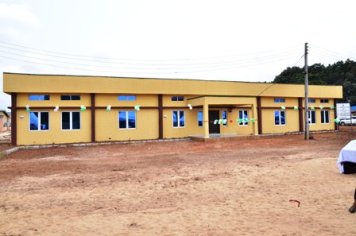