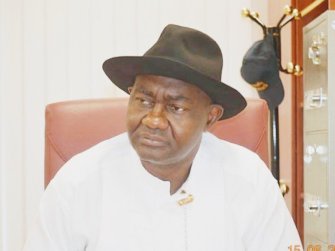 Member NNPC Board and former Senator representing Rivers South-East Senatorial zone, Senator Magnus Abe, has picked holes in the recent interpretation of the Supreme Court judgment on Akeredolu vs Jegede by Minister of State, Labour and Employment, Barr. Festus Keyamo and cautioned the Minister not to second guess the Supreme Court on the implication of the position of All Progressives Congress APC Care taker National chairman, Mai Mala Buni, who is presently the Governor of Yobe State.

Senator Abe, who is also a Lawyer and a key chieftain of the All Progressives Congress, APC, disclosed his position in response to Barr. Keyamo’s earlier press statement, on the legality of the position of the Caretaker Chairman of APC Caretaker/Extraordinary Convention Planning Committee, CECPC, following the Supreme Court judgment which confirmed Governor Rotimi Akeredolu, as the substantive Governor of Ondo State.

Senator Abe’s statement is published in full below:

NO KEYAMO: SELF IMMOLATION IS NOT THE OPTION FOR APC.

I was taken aback when my attention was drawn to a statement making the rounds on social media credited to my learned friend Festus Keyamo SAN, the Hon Minister of State for Labour, demanding that our party the All Progressives Congress must immediately halt all preparations for the forthcoming congresses and disband the Governor Mai Mala Buni – led National Caretaker/Extraordinary Convention Planning Committee (CECPC).

Mr. Keyamo’s argument is premised on his interpretation of the judgement of the Supreme Court of Nigeria in Jegede Vs Akeredolu.

Most members of the APC accepted the reality of the CECPC as a decision of the National Executive Committee (NEC) of the APC with Mr President as leader of the party in attendance.

Party leaders who had reservations about the constitution of the CECPC were informed that the decision to establish the committee was reached only after extensive legal examination of the issues confronting the APC at that time by a body of eminent lawyers in leadership positions in the APC . Barrister Festus Keyamo I am given to understand, was one of those legal luminaries whose stand swayed the President in support of the CECPC option as the only means to save our party from imminent self-destruction. That is why I was taken aback by the quick and sudden volte face of Mr. Keyamo in the face Of Jegede vs Akeredolu.

There is a popular saying that sometimes “where you stand on an issue is determined by where you sit”.

The Buni- led caretaker committee in the determined effort to reposition the party and carry out its difficult assignment, has adjusted the seating arrangements in a lot of states and this may explain the stand that some party leaders will take on this issue. But it is important that we deal with facts and the law.

The Supreme Court ( according to keyamo’s write-up) held that Buni was not a party to the case and so his status was not determined in the case of Jegede Vs Akeredolu.

It is therefore shocking that any legal practitioner will on the basis of that judgement reach the conclusion that the Supreme Court has already decided that chairmanship of a committee constituted by the National Executive Committee of a political party constitutes paid employment or an executive position as stated in section 183 of the constitution.

A decision by the Supreme Court that chairmanship of a committee constituted by NEC for a particular purpose can constitute an executive position or paid employment as envisaged by the constitution of Nigeria must be a matter of evidence, and it will have grave consequences not only for the APC but the entire polity.

This was carefully spelt out in the NEC resolutions that gave birth to CECPC.

These documents and and others pertaining to Buni, and his lack of remuneration and activities will be evidence before any judicial proceedings to determine the status of the Buni-led caretaker committee.

Any member of the party who is emboldened by Barrister Keyamo’s interpretation of Jegede Vs Akeredolu to challenge the legality of the caretaker arrangement of our party on that basis may do so, but the litigant will of course bear the burden of proof, and the party should be ready to defend its own position based on the evidence.

With all due respect to my learned friend Festus Keyamo SAN, he was merely second guessing the Supreme Court when he gave the impression or suggested, based on his understanding and interpretation of the said judgement, that any legal challenge against Buni, must succeed, no matter the circumstances of the challenge, insisting that mere joining Governor Buni will be enough for any litigation against the APC to succeed.

This is simply incorrect.
No two cases are the same.
The Supreme Court itself wisely declined to make a pronouncement against Buni on the ground that he was not joined and not heard.

To now conclude that whatever he would say when heard would not amount to anything as judgement must be passed against him is to overlook the age-long admonition of the same Supreme Court itself in the 1987 case of Lawrence V Nnaife that “justice and fairness demand that the ratio of any case should not be pulled by the hair of the head and made Willy- nilly to apply where the surrounding circumstances are different”.

Let’s tread carefully, cautiously. Instead of throwing away the baby with the bathwater, and causing a stampede, let’s all support the Caretaker to the point that it births a proper executive to prepare us for the future, especially the 2023 elections.

In the meantime we must consider our position carefully. We are less than two years away from the 2023 general elections, we have dissolved all our party structures across the states, we are less than a week away from the beginning of congresses to usher in our new working committee.

It has taken us almost a year to get to this point, there is no gurrantee that an attempt to start a new experiment at this point will not result in a political or legal quagmire that will lead to an implosion in the APC.

There is no perfect arrangement in politics.
The best course open to the APC is for our leaders to give full support and cooperation to the CECPC to conclude its assignment and usher in a new elected executive for the party.

Let me add for the record that there are issues in the party. Even the registration and revalidation exercise promised by the party in Rivers state has not been carried out and once again members of the APC in Rivers state are being denied forms for participation in our congresses, but problems within the party need to be dealt with.

To throw out the CECPC at this point may amount to self immolation from which we may not recover as a political party.

We must be steadfast and stay the course, there is nothing in the Supreme Court Judgement in Jegede Vs Akeredolu that implies that a Governor cannot serve as chairman of any committee in a political party of which he is a member.
The APC CECPC remains on firm ground.