PRESS RELEASE. RE: SOLIDARITY RALLY FOR IPOB LEADER, NNAMDI KANU IN PORT HARCOURT. The attention of the Rivers State Police Command has been drawn to a viral Video on Social Media about a Protest March purportedly held yesterday 30/6/2021 in Port Harcourt, in solidarity for the re-arrested Leader of the Indigenous People of Biafra (IPOB) Nnamdi Kanu, and would like to state as follows:-. The … END_OF_DOCUMENT_TOKEN_TO_BE_REPLACED 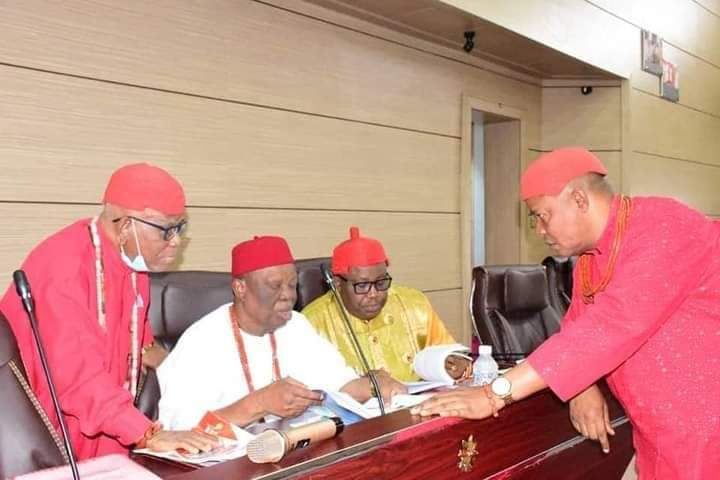 Traditional Rulers in Delta state have appealed to residents to be more vigilant and security conscious following the purported threat by Fulani jihadist to attack Asaba and Agbor over the Southern Governors insistence on banning open grazing. The monarchs gave the advice in a 4 point Communiqué issued at the end of their meeting in Asaba. In the Communiqué, delivered by the Chairman of Delta … END_OF_DOCUMENT_TOKEN_TO_BE_REPLACED

The Fulani community in Delta on Monday, June 14, dissociated itself from the 72-hour ultimatum to Governor Ifeanyi Okowa by “Fulani Jihadists” over proposed ban on open grazing by governors of southern states. In a news briefing in Asaba, the Delta State capital, Senior Special Assistant to Governor Okowa on Special Duties, Alhaji Muktar Usman, flanked by the leadership of the Fulanis, announced that they … END_OF_DOCUMENT_TOKEN_TO_BE_REPLACED

Delta Governor, Sen. (Dr) Ifeanyi Okowa, on Wednesday, June 9, 2021, commended the Nigerian Navy for its collaborative role in providing security for the nation’s oil assets. Okowa gave the commendation when he received the Flag Officer Commanding (FOC), Central Naval Command, Rear Admiral Kennedy Egbuchulam, at Government House, Asaba. He said that a lot was being done in collaboration with the Navy and other … END_OF_DOCUMENT_TOKEN_TO_BE_REPLACED

PRESS CONFERENCE BY GOVERNOR HOPE UZODIMMA ON THE GRUESOME MURDER OF AHMED GULAK It is with a very heavy heart that I address you today. The pain of losing a person or loved one, the horror of holding your family member in his or her final moments, the anger of someone being so reckless, so thoughtless that their bullet destroyed your life, are emotions no … END_OF_DOCUMENT_TOKEN_TO_BE_REPLACED

PRESS RELEASE IMO STATE POLICE COMMAND 30 MAY 2021 MURDER OF AHMED GULAK BY ARMED BANDITS. On the 30/5/2021, at about 07:20hrs, armed bandits intercepted and attacked a Toyota Camry cab carrying Ahmed Gulak and two others who were on their way to Sam Mbakwe Airport to catch a flight. Ahmed Gulak left his room at Protea Hotel without informing the Police nor sister agencies … END_OF_DOCUMENT_TOKEN_TO_BE_REPLACED

Governor of Rivers State, Nyesom Ezenwo Wike says it is still regrettable that adequate budgetary allocation for the security agencies in Nigeria has not been given top priority. A report by Kelvin Ebiri, Special Assistant (Media) to the Rivers State Governor, disclosed that Governor Wike made the observation when the Acting Inspector General of Police (IGP) Usman Baba paid a courtesy visit to him at … END_OF_DOCUMENT_TOKEN_TO_BE_REPLACED